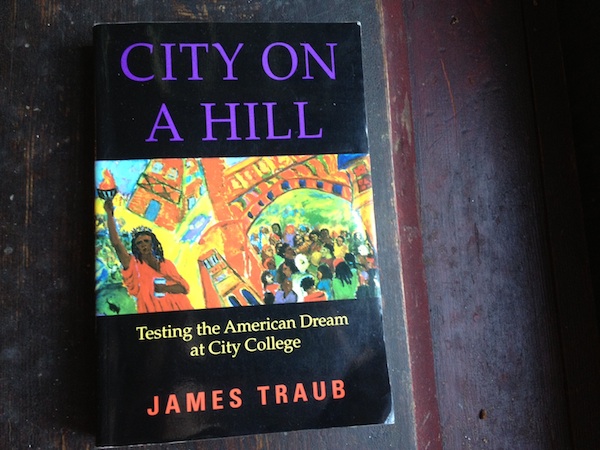 James Traub talks to students about the past and future of our college. by Jasmine Nieves

Twenty years ago, journalist James Traub spent two years on our campus looking at the effects of open enrollment. The result was his book “City on a Hill: Testing the American Dream at City College” published in 1994.  Late last month, Traub returned to CCNY for a week to look at what’s happened since. On October 4, he spoke to a group of journalism students in Shepard Hall. And this Monday, he’ll share his experiences at a humanities author event.

What got Traub, who has authored a number of other books and written for the New York Times, Time and the New Yorker, interested in CCNY?  “The reason why I wrote this book was because I wanted to ask the question, has the great experiment that goes by the shorthand name of open admissions worked?” he says. According to Traub, in the past City College was mostly white with a large Jewish population. At the time, it was known as the Harvard of the working class. In 1969, a group of Puerto Rican and African-American students demanded greater access for people of color.

As Traub explains it, “here was this place in the middle of Harlem, surrounded by a large Hispanic population, and it was all white. So SEEK  [Search for Education, Elevation and Knowledge] was created as an affirmative action program for a small number of Hispanic and African American kids to come in, and give them a City College education.”

Open enrollment began in 1970, allowing any high school student a place in a CUNY school, including City. Many that came were not prepared for the rigors of college and required remedial classes. Eventually the open admissions policy was abolished, but CCNY was changed into the diverse campus it is today.

When it was published, Traub’s book was met with mixed reaction. “A lot of people whom I respected intensely disliked the book,” admits Traub, who now writes about foreign policy and is working on a biography of John Quincy Adams. “But I was trying to show both the good and bad sides of remedial classes that were offered to these students.”

During the making of “City on a Hill, Traub came to understand the struggles of the new student body. At his recent visit, he asked how many students commute and work at the same time. Most nodded their heads or raised their hands.

Erica Gomez, a literature major, explained that the strain from her job and commute from Long Island to school have taken a toll on her body and her education. “I am definitely not finishing in four years,” she says in a demure tone. “I guess you can say that I am a super senior. I do enjoy being in a school with so much diversity though.”

Most current students haven’t read Traub’s book and don’t know how CCNY became a melting pot. But they appreciate attending one of the most diverse colleges in New York City. Cassandra Stern, of Italian and Irish origin, says, “I am considered the minority in this college, which is very different than what I am normally used to.”

Her friend standing right by her, Marianna Lopez, nods in agreement. “I like the fact that I am among a lot of Latinos, and just minorities in general,” she says. ” City College opens an opportunity for all of us and gives us all a chance.” Asked if they had ever taken remedial classes when they had entered City College, both women shook their heads. They said they were not sure what SEEK stood for.

Some students say they wish CCNY would return to the days before open admissions. “Honestly, the purpose of college was to get away from high school and move on to higher education.” says psychology major Lizzie Reyes. “I really don’t want to be paying tuition for the same education that I would get in high school.”