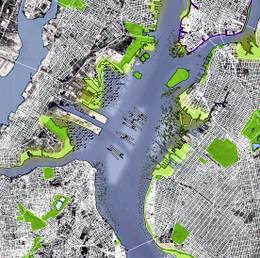 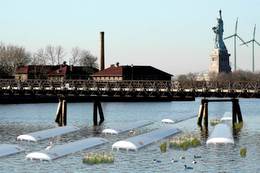 CCNY Landscape Architect Offers Storm Surge Defense Alternatives- Within the context of geographical impact and death toll, Hurricane Sandy was not Hurricane Katrina. However in this world, it’s all about location; Sandy slammed into one of the most expensive and important parts of America, if not the planet, when it devastated lower Manhattan last month. In response, New York State Governor Andrew Cuomo and other officials have publicly advocated for defensive measures to be taken to protect the bottom of Manhattan specifically from suffering a similar fate ever again. But that doesn’t sit well with City College Landscape Architect Catherine Seavitt Nordenson.  “Everyone outside of the surge protection zone would be in jeopardy because the water doesn’t get reduced, it just goes somewhere else. It’s an environmental justice issue. You can’t just save Wall Street.” In this following post, Nordenson’s argument for “soft infrastructure” that would protect the financial district with endangering surrounding areas. It’s a very interesting read, especially now that the after effects of Super storm Sandy are still so fresh in our minds. Check the entire article out here.

City College “City Serve” Initiative- In the month since Hurricane Sandy, a lot of well wishing, prayers, publicity and small acts of kindness have gone out to those we know here on campus affected by the super storm. But as many of us who live in less damaged areas of the city return to a sense of normalcy, our peers run out of the low lying areas of the city can’t fall to the wayside. CCNY is running an initiate called “City Serve” that can be used as a hub of communication, both public and private, and donation of essential resources. School President Lisa Coico and Chancellor Matthew Goldstein have written statements on the page directed to the entire student body; however the page’s real value is in all of the contacts and resources there to connect you with the people who need our help. Don’t forget about your classmates, your teachers, your executive faculty. For those whom this “City Serves” project is for, the nightmare is far from over. Find the homepage here.

Harlem & the City | Over 100 Years of Special Moments- Outside of the NAC, near the writing center, there is an absolutely fantastic gallery of art and photography chronicling the history of Harlem. It was up before hurricane Sandy, but was taken down and reinserted afterwards; a testament to how important it is to the school for us (the student) to view and admire the work of a collection of master photographers and historical icons. The list of appearances made ranges from World War I protesters in the 30′s to Afrika Bambaataa in the 80′s, with Dr. Martin Luther King Jr. and Jane Fonda making appearance in decades in between. Time flies and stands still at the same time viewing the gallery thoroughly. We strongly encourage you to go check it out for yourself, or at least look out for it in an upcoming issue of The Campus. For more information, click here.

The CCNY De-stress Group- As previously noted, there has been a troubling suicide trend among college students in recent time. Here at CCNY, in order to counter this tragic phenomenon, City College is sponsoring a De-stressing seminar aimed toward helping students relax and better deal with the stress of college students. Learn to better manage your time, your work and responsibilities, and learn to better cope with your own circumstances in a healthy manner. If you are feeling overwhelmed, especially in this time of finals, please attend, save yourself the emotional weight. For more information of the event, click here.