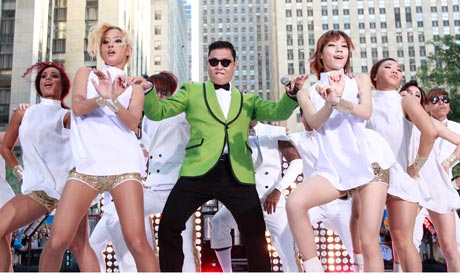 Of course you’ve heard the song “Gangnam Style” by Korean rapper PSY, and seen his hugely popular video on youtube. But his style of music extends beyond that addictive hit. Korean pop, or K-pop, is making its mark in America.

So what exactly is K-pop: an Eastern-Western fusion of hip-hop verses, Euro-pop, Asian flavor, rapping, and dub-step breaks all mixed into one. This all might sound like a horrible Skrillex remix track but for students like Max Brownstein, who listens to K-pop on occasion, says he finds the music surprisingly catchy.

“I understand why some people may be turned off by it because of the language barrier and all that but let me tell you the beats and repetitive chorus in all the songs especially in “Gangnam style” get stuck in your head,” say Brownstein, an engineering major.

Denisha Alvarado, who is studying education, agrees. She believes K-pop is different than any other genre in the music scene because of its content. “K-pop doesn’t just talk about having sex and doing drugs in every song like some American artist,” says the 22-year old. “The lyrics are more meaningful with a cool beat that kind of reminds me of late 90s R&B.”

Although K-pop has a relatively small following in America, it has become a fixture on music charts all around the globe like Japan, the world’s second biggest music market (after America) and throughout Asia.

Brownstein believes K-pop is ready to explode in the U.S. “I heard “Gangnam Style” when I went to a club in the Lower East side for crying out loud,” he says. “ I was truly shocked as to how many people were doing the horse dance, so I believe K-pop will have a bigger following.”

If you’re interested in K-pop, here are some K-artists worth listening to:

BIG BANG “Fantstic Baby”: this group consist of two rappers and three amazing singers. They are currently on a world tour.

GIRLS GENERATION: a nine-member group, the leaders of the K-pop movement and popular all over Asia. They are currently planning an American debut for late 2013.

2NE1: the four-member group–CL, MINZY, DARA, and BOM–mixes hip-hop with power ballads that differentiate them from most K-pop groups.

BEAST: Patricia Field, the Sex and the City costume designer, has become a big fan of this stylish boy band.

WONDERGIRLS: first Korean girl group to break into the American music scene with their popular hit “Nobody.”