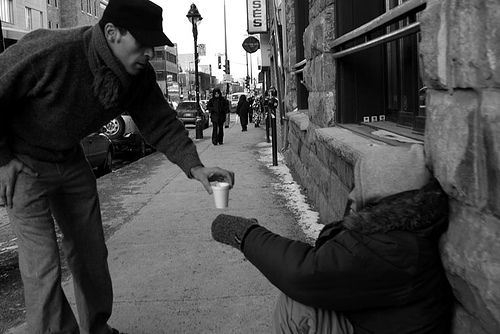 In early November, city residents were moved by an act of kindness from one of New York’s finest, Larry DePrimo. An NYPD police officer who had taken some time from his shift at work, he bought a pair of boots and socks for a homeless man. His actions changed the ways some people think of cops, and provided a heart-warming story during the hectic holiday season.

Here at City College many students say they have done something nice for someone they don’t know. CCNY student Dan Arboleda, 20, expresses his appreciation to those who help out. “More people should be that way,” says Arboleda.“I am from Westchester, so people usually act kind and generous, they are quite different then people who live in the City.”

Arboleda’s recent act of kindness wasn’t too long ago. “There have been times when I have swiped my metro card for someone who didn’t have a ride left,” he says.

Another student at City College says it’s nice to hear a good story about a police officer.  “To see that cop act in that way is great,” says history major Oscar Bautista, 23. “Here I am having a mentality that most cops are assholes, and I shouldn’t be generalizing now.”

He blames the press. “Media plays a significant role in publicizing cops as negative people, because they mainly focus on the negative things that they do,” Bautista says. “There’s always coverage on cops that stop and frisk, and arrest men who are only Black and Hispanic, and here we have a officer helping out a black man,” he explains. “It’s just a great thing.”

Senior Eric Quatrone, on the other hand, confessed that he was not shocked of
DePrimo’s act. “Honestly, there are a lot of people including cops who have done good deeds to others,” says the English major. “It’s like they make such a big deal, all of a sudden, just because someone snaps a picture at someone doing something. Where were the other cameras rolling to catch other acts of kindness? That’s right they were off.”

Despite his pessimism, Quatrone points to his own good deeds. “I learned that the best thing to give to someone who is poor, is food or clothing, not money,” he says. “Although they all are material, money doesn’t last as long as food and clothing.”