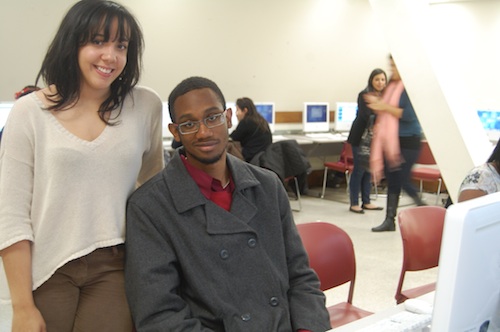 When a classmate disappears during a natural disaster, what would YOU do? by Ashley Duchemin

Three days after Hurricane Sandy hit, something hit me. I had been texting my best friend, Bennett D. Bennett (above with the author), continuously and hadn’t received a single response. I couldn’t take the suspense of not knowing what might of happened to his home in the Rockaways and, more importantly, him.

I took it to social media by posting a picture on Instagram. I tagged people in the advertising and public relations major who knew Bennett and might possibly know his whereabouts. A small group of girls who were tagged in that photo reached out to me. Barbara Cevallos, Gerardine Peralta, Biannette Camilo, and I expressed our mutual concern for our friend. What emerged from that conversation was an idea to start a donation drive.

Bennett, I found out later, was safe, but his home had suffered severe damage from the storm. He got wind of our idea the first day back to school. During our public relations writing class, I announced that any donations could be handed in to me for Bennett and the Rockaways. He immediately wanted to get involved in helping and so did our professor, Lynne Scott-Jackson. Later that night, he came up with a name– “Operation: Overcome.” He also devised a mission statement:

Founded by students of public relations and advertising at CCNY, Operation Overcome is a three-way system that allows anyone to be involved: Contribution (monetary donation), Communication (usage of social media as a forum on the relief efforts in affected areas), and Collaboration (connecting with friends and organizations on getting help, food, supplies to those areas).
With that, and the help of our public relations writing class, our efforts officially became a work in progress.

Bennett D. Bennett, our classmate Jasmyn Sanchez, and I make up the executive committee of the initiative. We want to focus on providing relief to people in the Rockaways that have been affected by Hurricane Sandy after they have been forgotten. These people are still looking for help in many areas. What they need now are specialized services that focus on stress relief, financial help and guidance, and rebuilding the community. We’re looking to help in supplying those services.

Currently, we’re working on a toy drive for the holidays named ‘Bringing the Holidays Back to the Rockaways.’ Many of the affected people may feel like this season’s joy has been taken away from them. We want to bring back that feeling of hope and happiness by hosting an event where people from all over can come share holiday cheer.