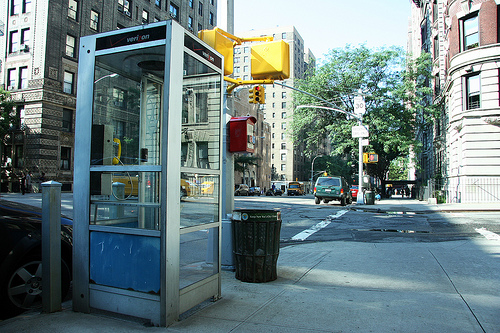 Just when you thought the payphone was obsolete. Mayor Michael Bloomberg wants to bring them back with a bit more than a coin slot and a sticky number key.

Mayor Bloomberg and New York City Department of Information Technology launched the Reinvent Payphones Design Challenge. They are looking for designers, planners and policy experts to create a more modernized New York City payphone. With New York City’s agreement with their current payphone vendor expires in 2014, it is an opportune time to revamp the payphones that are usually used as garbage cans.

What do CCNY students think about the competition? Michael Rodriguez feels that if the payphone competition is successful it would be a bigger hassle for New York residents. “I think the idea of the competition is cool, but everyone has a cell phone,” he says. “If they make it as high tech as they envision it, it’s going to be a huge nuisance.”

Others have a more positive outlook.  “It would be awesome if they had Wi-Fi connection on them,” says Lorena Martinez, 20, “It’s awkward when I get kicked out of Starbucks since I use their Wi-Fi and never buy anything.”The application for the prototype has to be sent by February 18, 2013.