Politicians constantly speak of editing the budgets and limiting spending. This week their latest cuts could directly effect CCNY, and of course You.

These cuts, also known as the Sequester, are coming from the federal government and set to take effect tomorrow March 1. Tuitions and pell grants will remain untouched, but other federal aid programs will likely be cut.

What can you expect? A smaller work – study program, less scholarships, and a cut to your finacial aid check. Click Here For More

The Rotunda Transforms into La Republica! 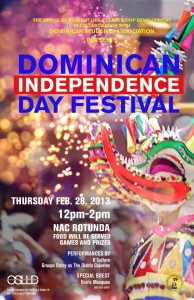 El 27 de Febrero, also known as Dominican Independence Day was yesterday, and in honor of their nation’s victory the Dominican Student Association (DSA) will host a festival today in the NAC Rotunda beginning at 12pm.

You can expect to play games that Dominicans on the island usually play, hear the tunes native to the island, and watch performances  by D’Culture-(a high school dance group) Groupo Batey as The Diablo Cojuelos.

Food and refreshments will be available, so expect to smell some platanos!

Can Working in Noisy Enviornments Hurt Your Hearing?

It’s not uncommon for college students to work as servers, hosts and bartenders, but can working in these enviorments affect your hearing in the long rung?

According to former Hostess, Alexis Clemente, it most certainly can. Clemente worked at the trendy midtown club called Lavo for two years. After prompted to test employee hearing, Clemente found she had significant hearing loss in her right ear. Scared for the future, she begged managers to transfer her to a “quieter” spot in the club, they responded by firing her and cutting her health insurance. Today shes fighting back in court. More on the story