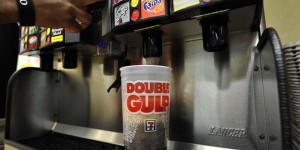 NYC is “enjoined and permanently restrained from implementing or enforcing the new regulations,” Tingling wrote in a statement explaining his ruling. Tingling cited the steep task of enforcing the ban as a key reason for blocking it, saying that the regulations were “fraught with arbitrary and capricious consequences” that would be tough to maintain “even within a particular city block, much less the city as a whole.”

Had Hizzoner’s ban gone as planned, it would’ve prohibited food establishments including restaurants and mobile food carts from selling sugary drinks over 16 oz. Supermarkets and convenience stores like 7 Eleven would’ve been exempt (both are regulated by the state’s government.) Now go celebrate by getting that McChocolate Slushee Extreme you meant to buy as a last hurrah. For more information, visit The Wall Street Journal.

It’s the (spoiler alert) duplicated version of a 1980s classic dance that’s taken the world by storm. Now the Harlem Shake is finally getting its own restaurant in the neighborhood that birthed it.

Croatian-native Jelena Pasic plans to open the “Harlem Shake” restaurant on W. 124th Street and Lenox Avenue in April. But the place will do more than just serve burgers and milkshakes.

For Pasic, who previously owned a coffee shop in Washington Heights and moved to Harlem in September, “Harlem Shake” will also help to restore the area’s heritage.

“We wanted to bring back the Harlem of the past,” she said. “All of these cool places that were the soul of the neighborhood were disappearing.”

Visit the New York Daily News website to find out more about the restaurant.

To honor Women’s History Month, five women under 30 will be showcasing artistic works of women they’ve encountered. The exhibit will take place in the Aaron Davis Hall Gallery from March 12th through April 19th. You can visit the opening reception today from 5:30-7:30pm.

If you understood the title, continue reading:

Every Tuesday, City College hosts the Behavioral And Cognitive Neuroscience Colloquium. The event is held in conjunction with the PhD. Training Area In Behavioral And Cognitive Neuroscience. Stop by in NAC room 7/236 today at 12:35pm. You just may learn something about how the human brain operates. Visit http://www1.ccny.cuny.edu/prospective/socialsci/psychology/Colloquium.cfm for more information.