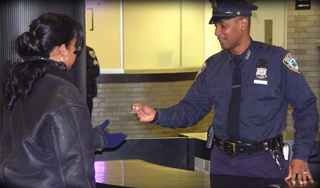 Security guards stationed at buildings at CCNY stop students and check ID cards for verification that they do not pose a threat to the campus or other students. But is this working to safeguard you and your stuff?

Serious, violent crime has decreased as the face of Harlem has changed, but crime in and around campus still exists. Students most frequently complain of and report lost and stolen property–a problem all over the city as the use of pricey tech items like ipads, lap tops, smart phones and Beats headphones increase.

“There is no high percentage rate in robberies or mugging, but there is a high percentage in lost property which usually happens when students leave their things unattended,” says Douglas White, director of public safety. “To lessen this we provided etching for phones/ipads and blu-ray for electronic instruments for tracking which is also registered with the NYPD.”

He lists other ways he and his staff look out for students and their belongings. “We also provide escorts after hours from 145-125th st stations, but not at restaurants or grocery stores,” he explains. “This strategy has been proven to be effective as well as providing annual crime reports which is now a federal mandate due to all colleges. In the case of robberies or mugging if we are able to find the person we track them, and report it to the NYPD.”

Overall, students believe these methods are working. Alexander, a senior studying electrical engineering, says, “I always see bikes and escorts on campus and I am aware of where the public safety department is. It makes me feel safe when they ask to see ID when entering buildings as this means not everyone can walk through.”

Kenroy Cherrington, former student government president, now staffer, agrees. “Public safety is quick to respond,” he says. “I also find it helpful that during club hours there is a table set up for the public safety department as it is the only time most students are free.”

Still, Cherrington and other students think some guards should work harder on their social skills. Says Cherrington: “Some security guards are dedicated, but some should be removed as they are rude and indifferent.”

City College seems to be doing a great job on protecting its students while on campus, but it is clear that students may need to start to take measures into their own hands and safeguard their personal belongings.