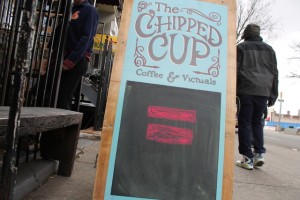 A Harlem mother is leading the charge for toy company Mattel to offer more accessories for Barbies of color. Harlem mom Karen Braithwaite got the idea while planning a Black Barbie-themed birthday bash for her five-year-old daughter, Georgia Braithwaite.

Initially, Braithwaite thought the party would be easy to plan. Georgia does own many Black Barbies, after all. But when she tried locating mini-plates, banners and cups, they all came bundled with White Barbies.

“Here we are 40 years later and still dealing with the same thing,” Braithwaite said.

She started a petition on Change.org to demand Mattel feature more accessories featuring minority-themed Barbies. So far, 14 moms have joined with her and the petition has received over 2,600 signatures.

“The message they are sending when they exclude black Barbies,” she added, “is that blonde hair and blue eyes are the ideal.” Read more about this story at DNAinfo.com.

Apparently, some people aren’t too fond of restaurants sharing their political views. The Chipped Cup, an eatery that recently opened up in Hamilton Heights, is garnering controversy for openly supporting gay marriage.

While the Supreme Court debates the legality of same-sex marriage in Washington D.C., The Cup made its views clear by drawing the pink equal marriage equality symbol on its sandwich board. One customer accused the shop of “trying to cram their political agenda” down people’s throats.

In a post on the Chipped Cup’s Facebook wall, Leesa Dahl wrote, “You just lost two local customers with your political sandwich board. We were so happy when you joined the neighborhood and were faithful, but alienating the majority of the population is a really irritating and dumb move. We will encourage others not to patronize your business.”
Owner Andrew Ding, who happens to be gay, was shocked by Dahl’s comments, especially since she’s been a regular. “It’s a sign on a sandwich board about equality. How anyone can turn that into something about hate is beyond me,” Ding said.
Luckily, not everyone is against the restaurant’s choice. “It doesn’t bother me because I think similarly and support gay marriage,” said Taylor Overturf, 24, a Columbia University student dropping in for coffee. Check out the full story at DNAinfo.com.
Man Falls From Roof In East Harlem
A man fell from a six-story building at Lexington Avenue near 104th Street Monday. He was taken to a nearby hospital, where he was pronounced dead. His identity has yet to be released. The NYPD is investigating it as a possible suicide, according to reports.
Locals who knew the man say he will be missed.
“We used to hug each other every day,” said Tito Rivera, 51, a professor. “He was a good guy. He had a very good voice.”
CCNY Vs. Brooklyn College
Today, the CCNY men’s basketball team will go against Brooklyn College’s team at 7 p.m. in the Nat Holman Gymnasium in the Marshak Building. Admission is free.
Test Anxiety Workshop
On April 4th, there will be a NSS-certified workshop about combating test anxiety-perfect for those upcoming finals. The event takes place from 12:30-1:30 in NAC Room #5/150. Register at this link.