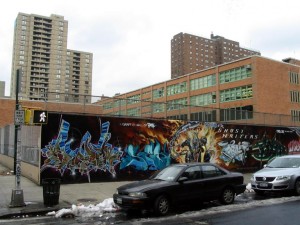 CUNY Sexual Harassment Workshop
Today, the Network Security Services will be holding a workshop detailing CUNY’s strict policy against sexual harassment. Attendees can learn about what constitutes sexual harassment, CUNY’s stance on sexual harassment and ask any questions on the subject. The event happens from 12;50-1:50pm in NAC Room# 6/111.

A 21-year-old woman was fatally struck by a car in West Harlem Saturday morning, according to DNAinfo. Authorities identified Taja Johnson of Mount Vernon as the pedestrian hit at the intersection of West 133rd Street and Eighth Avenue.

Johnson was rushed to Harlem Hospital, where doctors pronounced her dead on arrival.

Fifty-three-year old Boubacar Bathily, the man behind the wheel, turned himself in shortly after the tragedy. He was charged with leaving the scene of an accident resulting in death, driving without a license and failure to exercise due care.

East Harlem Gangsters Collared By The NYPD…Thanks To Facebook

At least 63 members of street gangs accused of terrorizing East Harlem since 2009 have been arrested and charged by the NYPD. So how did the cops collar the toughs? Check out one brilliant Facebook post below, just an example of incriminating at its finest:

“God forgives I dont … somebodie gotta die,” a member of the Air It Out gang wrote on the social networking site. According to Manhattan DA Cy Vance, such posts are crucial in capturing gang members.

“The internet is our 21st century crime scene,” Vance told DNAinfo. “There’s isn’t a crime here in Manhattan that doesn’t leave an electronic fingerprint on the internet.”

The 63 gang members were from three rival street gangs. They have been charged with conspiracy, conspiracy to commit murder, attempted murder, assault and criminal possession of weapons. They often worked from three public housing projects within the boundaries of East 116th Street, Third Avenue and East 106th Street, Fifth Avenue. The youth face up to 25 years to life in prison.

African-American members of East Harlem’s Community Board 11 are claiming they were cut to make room for more Latino members.

“I think it’s absurd. We need to stop the division because we are all going to wind up losing East Harlem,” said JoAnne Lawson, the board’s former chairwoman of housing and oversight committees who was not renewed for her position.

In February, Latino board members asked Manhattan Borough President Scott Stringer to bring more Latinos on the board, keeping in line with “El Barrio’s” main demographics. Fifteen members of CB 11 identify as Latino.

Stringer agreed with the request, appointing five new Latino members Monday. One of the new members denied any racial tensions or favorites. “I don’t think there’s a fight between African-Americans and Latinos,” Yma Rodriguez said. Read more about this controversy at DNAinfo.

Islamic Awareness Week
From April 8th through the 11th, Islamic Awareness Week will convene in the NAC Rotunda to educate CCNY students about the biggest misconceptions of Islam. Come and learn about whether Muslims believe in Jesus, what Halal food is and why Muslims name their children after Muhammad. Call 347-652-6726 for more information about the week’s events.