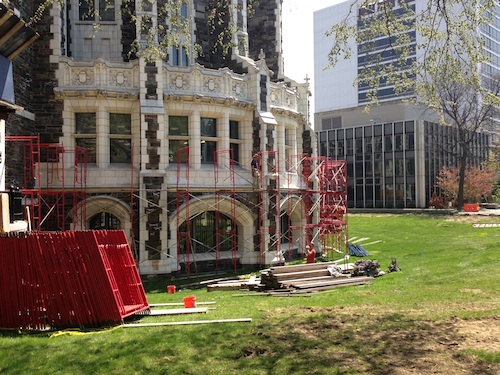 No, really what is happening and WHEN will it be finished? by Christina Pagan

Windows are boarded up, entrances and exits are closed, and scaffolding encircles Shepard Hall due to the construction work on the CCNY campus. Some students welcome the renovations while other students dislike the distractions–and the noise.

CCNY officials say the work is necessary. “The construction started 20 years ago. Right now we are doing exterior work on the facade restoration of Shepard Hall,” says Vatthana Chin, 43, project manager in the facilities department of CCNY. “We’re working on replacement to the Great Hall roof next and we’re in the last and final phase of the façade restoration.”

Some students don’t care how vital the construction is, they want it to stop. “It’s so hot in here,” says Tyfanny Puello, 20, as she walked into a third floor classroom in the Shepard Hall. That’s one of the few complaints heard around the Shepard Hall building, because of the boarded up windows.

Other students can’t concentrate. “If you go to the fourth floor, at the end of the hall, a lot of the time there is a banging noise,” adds Alison Gregory, a media and communications major.

Others aren’t worried about the noise that the construction produces. “I can put my headphone on and tune it out,” says Angela Perez, 21, a theater major.

Finally, some students are happy to see that the buildings are being cared for. “I’m glad that their doing renovations, that building is so old it can use some maintenance,” says alum Marcos Sotomayor.

Regardless of how you feel about the construction, it’s best to get used to it. Facilities confirms that renovations on Shepard Hall aren’t scheduled to finish until 2014, and management plans to also renovate other sections of the campus.