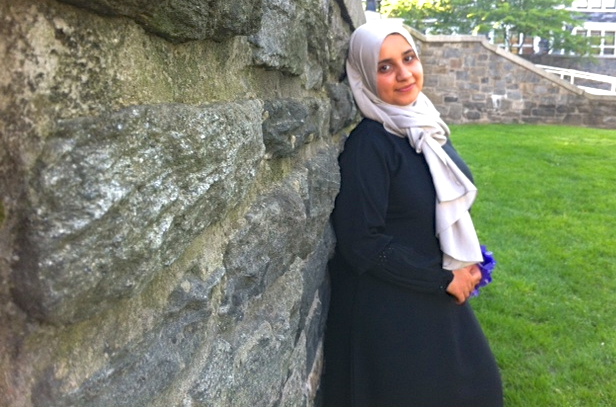 CCNY history major Sondos Alsilwi (shown here) chooses her friends because of their character, not their faith.  “Some people can’t believe that my best friend is Jewish,” says Alsilwi, who is Muslim and wears her hijab proudly. In high school, she became friends with Rebecca. She and her friend talk about their different faiths without anger or hostility.

“In the end we are humans,” adds Alsilwi, “and others’ beliefs are just as valuable as yours.”

Though Rebecca and Sondos are comfortable talking about religion, many others feel more hesitant discussing faith. According to a 2013 informal survey by Grit Communications, a CCNY Ad/PR workshop team, while most CCNY students like to think of themselves as “tolerant,” they avoid casual conversations about their beliefs.  Actually, however, friendships offer an ideal way for students to share their differences and learn from others. Religion is deeply personal, and sharing one’s beliefs can create a stronger bond between two friends. Although friendships are often based on similarities, bonds can become even stronger when friends share and learn about their beliefs.

Alsilwi says that she’s happy she has friends to talk to about her faith and her experiences. Though most CCNY students would agree that they think of the campus as a safe haven and a judgment free zone about their religious beliefs, Muslim students–especially lately–sometimes feel on the defensive. In 2012, Muslim students like Alsilwi were dismayed to learn that the NYPD enforced a surveillance program that sent informants to spy on Muslim organizations on CUNY campuses for terrorist activity. She and her friends felt their every move was watched.

Despite her discomfort at the time, Alsilwi says she has put this incident behind her. “I can’t be scared all the time,” she explains. “I needed to move on.”

To help create greater community among CCNY students, Grit Communications and The Boniuk Center at Rice University, an organization that encourages people of different faiths to engage with each other, are working together to promote religious tolerance among college students and encourage close friends to discuss their beliefs. “It’s easy to create community among like-minded people who share similar roots,” says Mike Pardee, director of the Boniuk Center. “It’s harder to create a sense of genuine community among people who share significant differences. But this can and must be done.”

To get involved, attend the “Real Friends, Real Different” event on Monday, May 6th from 12 to 2pm in the NAC Game Room. And follow Grit Communications on Instagram @GritComm.