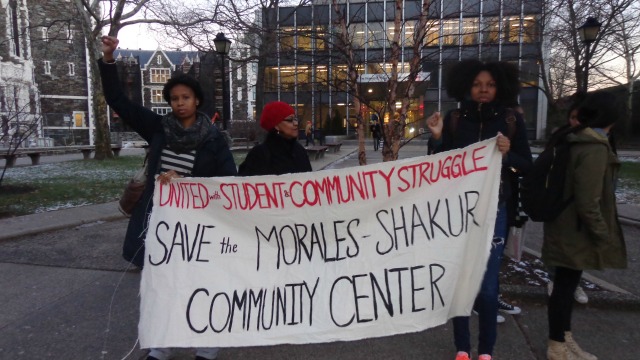 CCNY student activists crashed President Lisa-Staiano Coico’s holiday party in Shephard Hall’s Great Hall Thursday. They were there to remind her about the Morales-Assata Center and her role in the controversy.

Students on the Great Hall balcony draped a banner reading “Save The Morales-Shakur Community Center”. As that happened, fellow activists infiltrating the first floor began an open mic talking about the center and taking Lisa to task. The Campus recorded the banner unfurling and the open mic here.

“This has not been a wonderful year,” a student said. “I find it ironic, that Lisa has called a holiday party for a wonderful year. Tell me how wonderful has it been when there have been students who have been pepper sprayed, put in jail, trampled on our rights of freedom of speech and freedom of assembly?”

Shortly afterwards, security officials confronted and told the students on the balcony they had to leave the building, along with the others. One officer told students they were being “disorderly.”

After leaving, the students briefly marched down Convent Avenue with their chants before dispersing, sure to return and resume the fight at a later day (see the short march here).