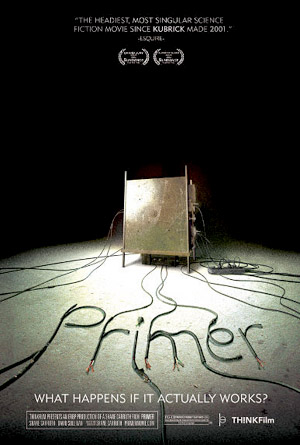 In a non-descript storage facility in the suburbs sit two mysterious machines, the culmination of a group of friend’s hard work, of their nights, of their weekends, of as much capital as they could muster. Then they discover something shocking: they’ve created time machines.

The question of what do with these machines arises. At first it seems the machines may be commercially valuable, but this proves false. This is when the inventors turn towards using the machines to benefit themselves. One inventor is conscientious from the beginning, while the other inventor is more adventurous. One inventor is wary of the potential dangers while the other inventor ignores them. They both profess their not wanting to alter the past, but each has a different level of commitment to the subject. They both try to keep the project quiet, under wraps from world, but things easily get out of control amongst themselves. Aghast at their errors, they try to set things right, but since time travel functions according unknown sets of laws different from those of linear time, the concocted logical solutions to their problem end up becoming just additional steps towards disaster.

Supposedly made for only $7,000, this film is a marvel. Not only is it a fascinating story, the camera work and the production value are very good. With long scenes, and thoughtful performances by the cast, this quasi sci-fi/arthouse film is a visual pleasure to watch. It doesn’t screen as a low budget thriller. While director/writer Shane Carruth’s vision isn’t exactly crystal clear, this mystery is part of the film’s charm. For a film about a complex subject like time travel, the success is in Carruth’s ability to purvey the concept with very little flare. Everything seems to have aligned perfectly here. That is not to say it is the greatest film ever, but for a movie about such complicated subject matter, the bare-bones approach is very interesting. The script and characters talk about what they know. A narrator fills us in on a few more key details. Then the rest we are left to figure out on our own. As a sci-fi thriller, this formula works very well.