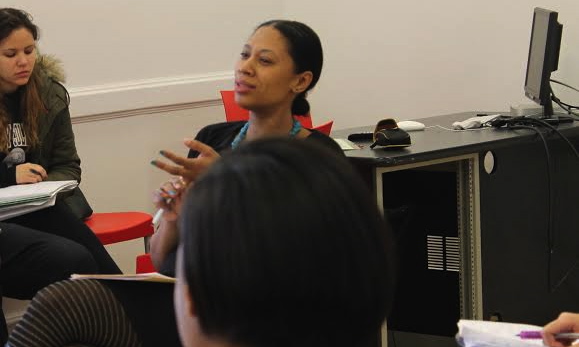 Distinguished journalist Angela Bronner-Helm held a press conference at CCNY recently. Helm, 40, discussed her career path as a writer and offered insightful advice to the students enrolled in CCNY’s Introduction to Journalism course.

Helm shared with students her transition from a focus on women’s and gender studies at Amherst College, to obtaining a ­­­­masters degree in journalism from New York University. She acknowledged the media as an ever-changing industry and encouraged her listeners to explore its various fields. Her six-year commitment to AOL Black Voices, and previous editorial positions at both Uptown and Essence magazines demonstrated her expertise in the field. “Know the industry and work hard,” said Helm.

No stranger to obstacles, Helm has managed to overcome adversities. Despite the struggles she faced as a young single mother at the beginning of her career, she managed to maintain positions at various media outlets such as AM New York, The Source and XXL Magazine. Currently she runs her own editorial consulting company, At the Helm Media, alongside her husband, while raising her teenage daughter and seven-year-old autistic son.

Throughout her career as a writer, Helm’s enthusiasm has always been motivation for her success. “One thing that has always driven me is my passion,” said Helm, who resides in Harlem.

The journalist, consultant, wife and mother strives to reach audiences with articles that inspire change and allow her voice to be heard. She lent her encouragement and support to the young journalists of CCNY. “If you’re interested in something, if you’re passionate about something,” said Helm, “I would definitely encourage you to go for it.”