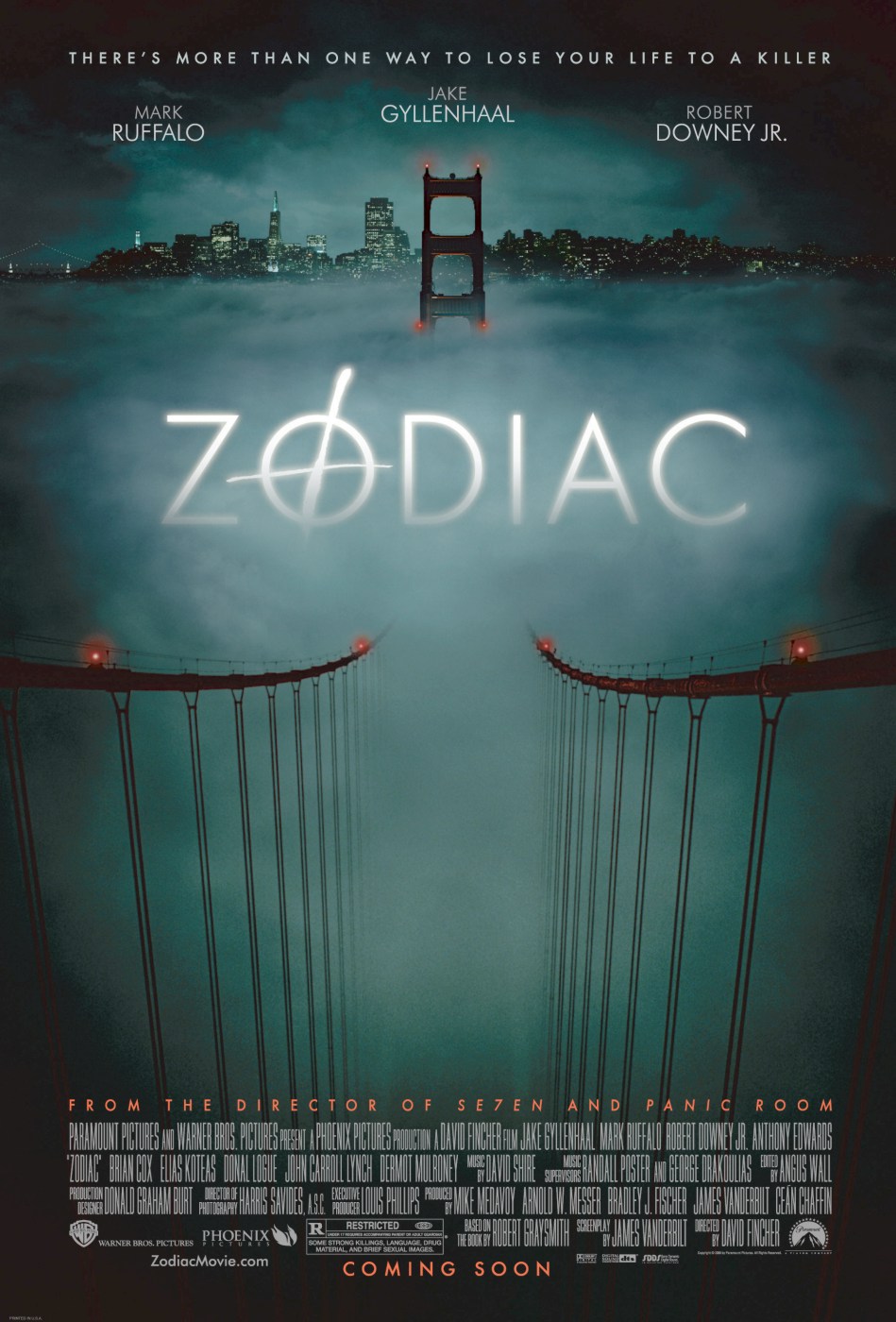 Now that the criminal mastermind flick has become a set type, a widely overdone one, this film tends to get easily shrugged off as yet another film about an ultra-intelligent serial killer who is always one step ahead of the cops, just like Seven. Still though, this film is quite different. Zodiac has nowhere near as much internal darkness bursting from its seams.

Zodiac is dark, just not Seven dark. Even though Zodiac is still a murder-thriller, it’s tone compared to Seven is a like a lovely ray of sunshine compared to a hairy tarantula. Being that this storyline is all loosely based on actual events, enacting the film out in the time period during which it occurred (the late 60’s-early 70’s) gives the film a freshness, a nostalgia that seems to come with the act of remembering those decades and trying to relive them.

The plot: In an age before mail bombs and anthrax scares, a killer toys with his pursuers by leaving complex clues just above their tracker’s radars, just out of reach of their capabilities. The chase then becomes perpetual, the madness is widespread; reporters, cops, and victim’s families are all exposed to the society-engulfing sense of paranoia that exists when a serial killer remains yet to be caught.

Director David Fincher’s use of lighting and shadows is prevalent once again as they are in his other work. Critics have said that perhaps his most important set of tricks (perhaps they could even be called Finchinian, or would it be Ficheresque?) resides in his lighting and mis-en-scene direction. In the real tense bits we get close, claustrophobic shots, bare-bones dialogue, tense body language, the potential victim’s fear seeping almost literally thought the screen, then… BAM! Scene complete. No sentimentality.

None of Fincher’s tactics in creating suspense come across as clichés. These are textbook lessons in how to frame a successful suspense scene. In a thriller the actor is a part of the puzzle. Like a part of complex musical arrangement, all the players need to play their parts perfectly.

Characters in thrillers are thrown into extreme situations.  Great performances are made by the actors that find the rawest, ravenous ways to claw their way out, even if the character fails. Zodiac makes a viewer feel like they’re in a bottomless pit.

During Zodiac, Jake Gyllenhaal was still coming up in the ranks in the world of Hollywood. He had not fully moved on to the badass action hero roles he plays today, and in his underling position in the film, as a cartoonist constantly getting in the way of the “real” reporters, he becomes an interesting underdog of a main character, even though he’s not supposed to be the main attraction.

Thrillers are said to be the king of film as the symphony is the king of music. Great symphonies are difficult to execute: there are so many elements and moving parts. Everything must align perfectly so when a moment of suspense is created, we cannot help but to be transfixed in awe. In symphony it is when our ears both love the progression of the melody and yearn to hear more.

In film, it is loving the buildup of plot, and an aching to know the final resolution, fully and completely.

Zodiac has those moments.