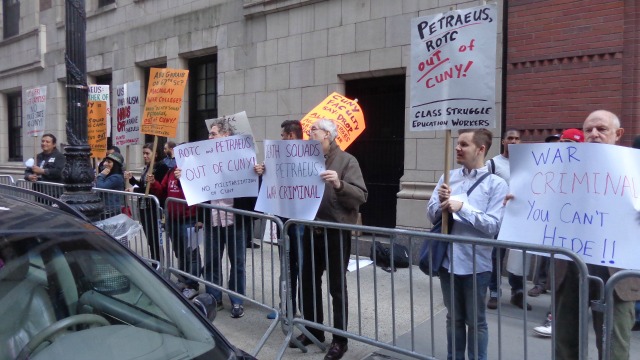 CUNY students, faculty and other community members gathered outside the Macaulay Honors College Tuesday,  protesting an appearance by David Petraeus

“David ‘Death Squad’ Petraeus! Out of CUNY now!” the protesters shouted across the street from the college, referencing the ex-CIA general’s foreign policies  in Iraq and Afghanistan. Petraeus was at the college to speak about world affairs, according to the Revolutionary Student Coordinating Committee’s Facebook page. His CUNY teaching contract is set to expire shortly (see chants here).

Later on, crowd members spoke out against Petraeus, Many placed his appointment within the context of a militarized superstructure.

“The Pentagon, and the Defense Department, if you read their papers-and we have-they came to CUNY for a reason,” said Lenny Dick, a math professor at Bronx Community College. “They’re planning up to 1,000 expeditions and forays and interferences and underminings and assassinations throughout Africa as well as other parts of the world.” (watch Lenny Dick’s speech here)

“So far, the imperialist United States has deported two million immigrants, just for the so-called crime of looking for a job,” said Antonio, a member of the CUNY Internationalist Club. “Now CUNY [brought] a war criminal to teach in CUNY to our students.”

Naresh Singh spoke about how his grand-uncle was forced into serving after finding limited options in America-a common reason many join. “Because he didn’t have work experience, because he got a degree in another country, he couldn’t find work,” Singh, another RSCC member, said. “So what did my other grand-uncle do? He kicked him out onto the street. He was living as a homeless man-a bum. That is why he joined the army.”

“Who [are] Petraeus’ ‘warrior scholars,’ as he calls them? It is the working class.”

A member of the CUNY Six also shared thoughts with the crowd. “There’s a relationship between ideology and class struggle,” said Luis Henriquez, a RSCC member who has spent the past few months battling his charges in court. “The individual policeman thinks that they are carrying out justice and these kinds of things. But they do not realize that what they are doing is sustaining and maintaining an exploitative relationship-this is how ideology functions.”

Even though Petraeus is moving on, that is no reason to celebrate, Henriquez said. “Petraeus is leaving, and he’s not gonna be here for another semester, but who’s gonna come along next? Are we gonna have somebody like Ray Kelly teaching up in CUNY?”

“Now why is it that they’re so avidly hunting us? Why is it that they’re going after revolutionary student groups such as RSCC?” asked Tafadar Sourov, who was arrested during protests on campus for the Morales-Shakur Center. “Because of the politics that we represent. CUNY is locking out working class communities made up of people from oppressed nations-immigrants, Latin Americans from Asia, from all parts of the world.”

The demonstration came months after the first protest against Petraeus’ appointment as a CUNY professor, which resulted in a confrontation between students and the NYPD. Six members of the Revolutionary Student Coordinating Committee were arrested. CUNY eventually pressed charged against the students-many of whom have since beaten them in court.