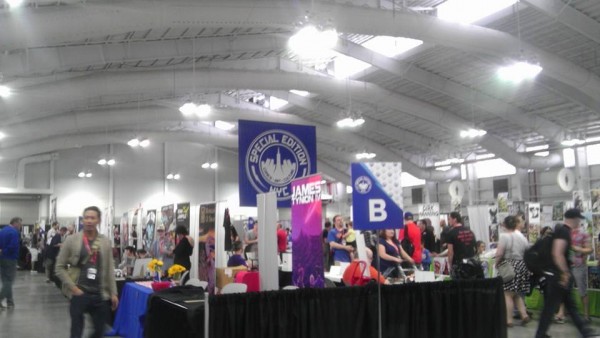 Comic Con will take New York City by storm in October, but fans–like so many of you CCNYers–got a sneak peek earlier this month. The first ever Special Edition NYC, a pre Comic Con celebration, offered a fix of comics, art, toys and more.

Special Edition NYC is the closest anyone will ever get to the comic book conventions from back in the 80s and 90s. Hosted at the Javits Center, the main focus was strictly on comic books and the art culture in the comics, not video games, movies, or TV shows; no Walking Dead panel and not much costume play. Special Edition was a small event without the madness and chaos that goes along with NYCC.

But small didn’t mean bad. Special Edition was open-spaced and more relaxed, without the huge lines, pushing and shoving of Comic Con, and no big crowds. Vendors distributed insane amounts of memorabilia, toys and books to would-be customers, including exclusive items such as comic book caricature figurines, statues as well as other forms of collectibles.

Best of all, aisle upon aisle were populated with comic book / freelance artists showing off their finest work. Some exhibitors did speed art while others specialized in artwork involving licensed comic book characters, while still others some did paintings.

Special Edition NYC was an intimate convention, a preparation for the main event in the fall. This first ever Special Edition produced a better turnout than some expected; hopefully for New York fans, it won’t be the last.