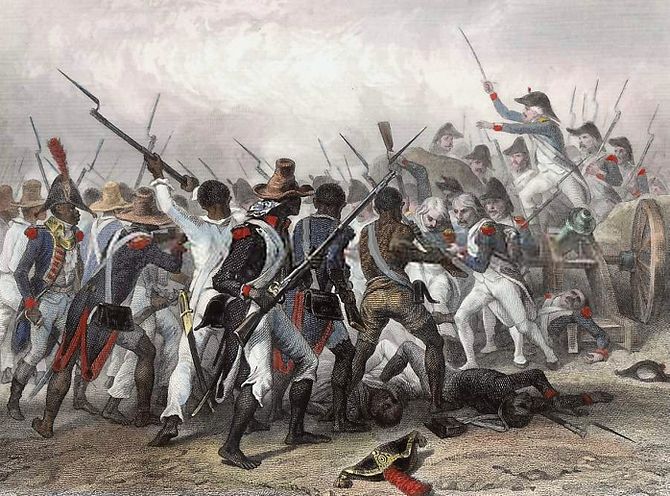 English: Scene of the Battle of Vertières during the Haitian Revolution (Photo credit: Wikipedia)

Like every other year, York held its annual club fair earlier this month, showcasing the sheer diversity of organizations and groups started by York’s student body.

The club fair is meant to give clubs an opportunity to recruit new members and give new students a chance to become more active. One club hoping to gain more traction this year is the semi-popular Haitian Students Association (HSA), who aim at getting more prominent footing within York College’s student body.

HSA was started in the early 2000’s, and every semester since then, try to come up with fresh new interesting activities to keep their current members happy and new members excited and involved.

“Our goal is to pass on the culture and information about Haiti with York,” said club treasurer Gianni Gustave.

“We offer academic support to our members,” Gustave said. “There are a lot of students curious about Creole. They would like to learn our language so we teach them. We organize a few events for this semester.”

The club is also known for serving a number of delicious Haitian dishes at their events including griot (fried pork), diriz kolé (brown rice with red beans) and macaroni gratine, just to name a few dishes to keep an eye out for.

According to Gustave, Haiti unfortunately has a bit of a bad wrap in the media, with flat out untrue assumptions being spread about the country’s cultural practices and lifestyles of the native people. Gianna believes the club can help open people’s minds to the real Haiti.

“There’s a lot of misconceptions about Haiti,” Gustave said. “One of the goals of the club is to change the image from our side. As students, we’re supposed to be active and voice our opinions to others. The first step is to show the culture because a lot of people don’t see that on TV.”

The club also intends to keep things light and bring the more fun aspects of Haitian culture to the forefront. A big part of that is through music and dance.

“In this club, we learn about the Haitian culture and not in a boring way” said club president, Julissa Duchatellier. “We perform cultural dances that trace back to several different countries in Africa.”

One of the dances that they perform for example, is called Ibo, named for the Igbo nation of Nigeria. Duchatellier explained that the movements of this dance represent the breaking of the chains of slavery, a topic very much rooted in the Haitian culture. “We also talk about issues in Haiti and inform people that don’t know about what’s going on in our country.”

The club isn’t just focusing on the news of today, though. They have plans to celebrate positive aspects of Haiti’s history, which they’ve successfully done with past dance events and mini festivals during club hours.

“In November we have an event called the Battle of Vertieres which commemorates Haiti’s last battle that helped us gain independence, making us the first black republic to gain it,” Duchatellier said. During the event, the club will perform the previously mentioned Haitian folkloric dances and will feature singers as well, showcasing the club’s diverse talent.

You don’t have to be Haitian to join the club, its open to anyone who wants to learn and join in on the celebration and preservation of Haiti and its long and complex history. Members say they are welcoming and enthusiastic to share stories and tidbits about the small yet deeply historic Caribbean country.