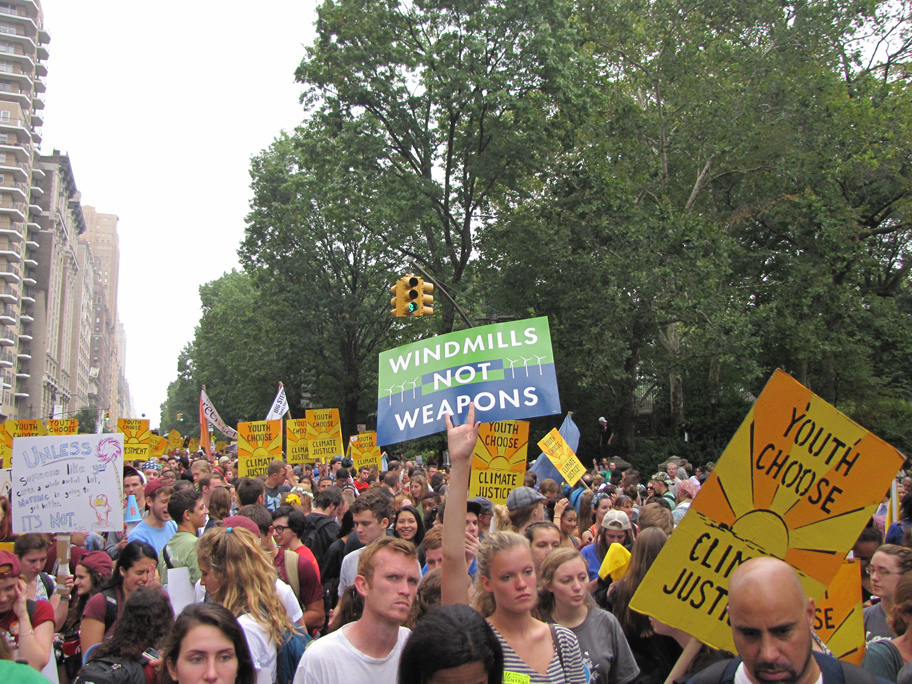 On Sunday, September 21, 2014, an estimated 400,000 people from all over the world took to the streets of Manhattan to voice their disapproval for the current status of climate change in our society. The student portion of the march departed from 86th street running through Columbus Circle and then through Times Square, eventually ending on 11th Avenue. Prior to the march, the route had already become immensely packed. Many people had shown up to support their claim that climate change is a real issue and should be seriously addressed.

The protesters had been divided by how climate change affected them. At the front of the March were those who had already been affected directly by the threat of climate change, including New York City’s victims of Hurricane Sandy.

Following these were groups largely consisting of  students, who made up an estimated 50,000 of the people in this entire march. Among these included some City College students who also believed that the time to move on to greener energies and lower emissions was now.

Rachel Ariz, a current CCNY student and student board member of the New York Public Interest Research Group, made this statement on the march: “The People’s Climate March is an important opportunity for New Yorkers to unite and express themselves in one voice. At the rate we are going, the environment isn’t going to in a feasible state in 50 years. This march lets officials know that we are serious about wanting change, and are willing to take action.” Also among those that showed their support of the march was Ban Ki-Moon, Secretary General of the United Nations, who is also a key supporter in the reduction of emissions and a global treatise on the issue. As he has stated “today we must set the world on a new course,” showing that the People’s Climate March not only had support from the common people, but also government officials with the power to make these changes.

The People’s Climate March, while being a large protest itself, had chosen to make its claim peacefully, unlike many other mainstream protests that focused on disobedience and rebellion. 350.org, the organization responsible for the movement had set a code of conduct for the march: that those who show up were expected to respect and agree to terms that included forbidding the use of violence, weapons, and destruction of property.

If you would like to be involved in this growing global movement you can start by coming to meetings of NYPIRG (the New York Public Interest Research Group) at 12:30 on Tuesdays in NAC 1/120. NYPIRG is in the process of creating a coalition for CCNY students to educate each other on Climate Change, culminating in an event in October.