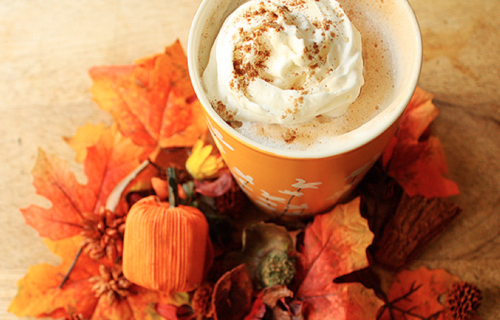 Tis the season but should you splurge?

You officially enter into fall when Starbucks starts putting up Pumpkin Spice Latte promos and you smell the cup of pumpkin spices everywhere you go, like the cute guy in scrubs next to you on the train holding a cuppa. And pumpkin anything has exploded over the last few years with many other businesses including it into their theme menus. Witness pumpkin beer, even pumpkin beef jerky, you name it!

Since Starbucks invented it a decade ago pumpkin sales have increased up to 36%. This blissful syrup-sugar-caffeine based beverage can be found in most chain coffee shops as well as the hippie coffee houses starting from late September until Christmas time.

But despite the big hype and the temptation, could it actually good to be gulping down 40-50 grams of sugar every day and spending $5 or more for a cup of pumpkin latte?

A grande cuppa usually priced at $5. 50 in Starbucks and $4.40 for a large at Dunkin Donuts adds up, especially for students on a college budget. Some students love PSL so much that they overlook the price. “I really love PSL, but good only at Starbucks which is super expensive on a student budget,” says Jeff Evandort , 22, a student at CCNY.

Leslie Cruz, 21, a CCNY student and bubbly and caffeinated employee of Starbucks, explained the anatomy of the fabulous PSL. “It’s made of concentrated artificial flavor and syrup.” In other words it actually has nothing to do with pumpkins. So why do people love it? “Because it’s seasonal; and people look forward to it,” Cruz explains.

As college students we consume up to 4-5 cups of coffee or more each week; adding up to 220g of sugar average and up to 1850 calories per week. Too much of anything good can’t be so great, especially if it means that you consume large quantities of harmful artificial chemicals and sweeteners into your body. Think about the spice. Is it all that nice?