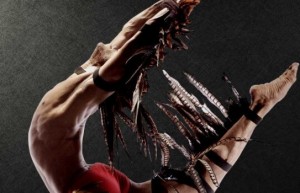 The Dzul Dance Company’s performance of Mexico Maya, by the Jamie Lucero Mexican Studies Institute, was held in the Lovinger Theatre and was a celebration of Mexican culture, Latino heritage and the Company’s 10th anniversary. The company’s artistic director, Javier Dzul, said this spectacular performance came from his fear of not being able to create something which would be as positively received as his last creation, Forest of Kings. Dzul, who was raised in southern Mexico, stated, “Mexico Maya is about all the fears we survive in order to live in a foreign land.” The story addresses his Mayan roots, the story of Frida Kahlo, and the struggle of maintaining and recognizing Latino cultural identity in immigration.

The performance was packed with sounds of the jungle wilderness, tribal music, classical compositions, and hip hop. Viewers became aware of the modernity of the piece once the curtains opened to reveal two aerialists dressed in body suits that made them appear to be tattooed. There were impressive pieces that involved two or three dancers allowing the audience to focus on the dancers’ strengths and relationships.

The lighting, which was often a spotlight that created shadows, added to the sense of movement, intensity and symmetry throughout the show. “Despedida,” performed by the disciplined So Young An, lit only the dancer’s body against the curtain, creating a kaleidoscopic effect with the shadows that mirrored her movement. This spotlight technique was used in “Princess and the Tree” as well, casting shadows upon Dzul’s bare back while he moved and creating the impressive effect of tree bark.

Dzul’s aerial performance of “Freedom,” a piece in which he climbed up a cloth and suddenly descended, expressed feelings of failure and a final implication of accomplishment. “Harmony” involved the entire dance group hanging onto a rope and each other in a perfect cascading effect. The diversity of the company itself was especially effective in this piece where the bodies seemed to blend together, encompassing all the different complexions and physical features of Latino people.

The diverse performance lasted 75 minutes without intermission. Any initial feelings of alienation quickly fell away along with language barriers because of the talent exhibited by each dancer, the socially conscious message apparent in a performance with little words, and the use of traditional Spanish and indigenous music as well as hip hop and guitar. When asked about the future of the Company, Dzul commented, “I hope the future of Dzul Dance helps to create a culture that is open to positive values and strong enough to fight for a new beginning.” His influential creation of Mexico Maya – a genuine and sublime celebration of Latino heritage – is definitely a giant step in that direction.