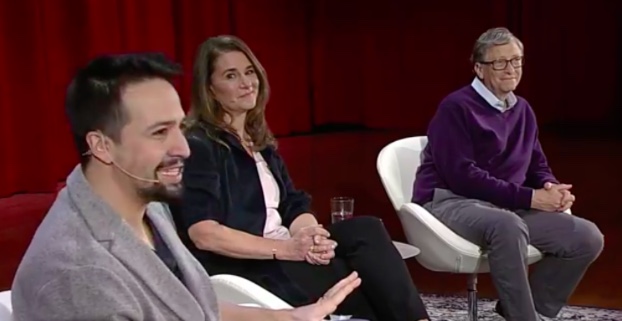 DATELINE: CUNY — A week after the U.S. stock market plunged, one of the richest men on earth, Bill Gates, told an auditorium full of students things are getting better.

That air of optimism would linger through an hour-long Q&A as Bill and Melinda Gates released their 10th Annual Letter via Facebook Live, with the star-power help of “Hamilton” creator and star, Lin-Manuel Miranda. Nearly 2000 Hunter College and high school students, alumni and friends of the college packed Assembly Hall at the school’s Lexington Ave. campus.

The 14-page letter, made up of the top most difficult questions asked of the couple throughout their years in philanthropy, was placed on the arm of every seat in the auditorium. The theme of the letter – optimism – set the tone for the event.

“The world is getting better by almost every objective measure,” said Bill Gates. “It doesn’t happen automatically, it’s because people care, it’s because there are scientific inventions.”

Gates cited New York City’s drop in crime and the drop of child mortality rates internationally, an effort his foundation supports, as proof of improvement.

Last year, most large cities throughout the country saw a decline in crime. According to the New York Police Department, murders fell 57 percent since 2000. In 2017, the NYPD recorded fewer than 300 murders for the first time since the 1950s. Globally, the United Nations Children Fund reported the death of children under the age of 5-years-old dropped below 5 percent for the first time.

Effective international development was on the mind of one science student who asked the panel for help in scaling her invention that transforms shipping containers into temporary shelter for the homeless.

The gesture is in line with the ongoing philanthropic work of all three hosts. Bill and Melinda Gates donated $4 billion to developing countries and $500 million to this nation’s education system. While Miranda continues to lobby lawmakers to support arts education and more recently fundraised to help hurricane-torn Puerto Rico.

When the topic switched to the impact that artificial intelligence would have on jobs, Bill Gates remained positive.

“AI is just the latest in technology that will allow us to produce more good and services without much labor,” said Gates. “AI can be our friend in terms of allowing us to take these huge shortages and provide to everyone what only a few people are able to get today.

The panelist fielded questions largely from audience members, but tech mogul Mark Zuckerberg made a cameo when he posted a question via his company’s streaming portal –– Facebook Live.

“If you could go back and give your younger self one piece of advice, what would it be?” wrote Zuckerberg, who jokingly added that he was “asking for a friend,” an addition that drew chuckles from the crowd.

While all three panelists took a shot at the question, Bill Gates responded with regret that naivety led him to believe intelligence was the sole factor in developing skill sets.

“I thought if you had a high IQ you could do anything,” said Gates.

Audience members steered their inquiries around arts and science, including students from Hunter’s elementary school of which Miranda graduated.

One grade-schooler asked Miranda what the Broadway phenomena could do to bring theater to every community throughout the world.

This, after President Trump dramatically reduced funding to the National Endowment of the Arts earlier this week, crippling the largely federally funded agency, which looks to lose over $100 million in support.

“Studies will bear this out, when you have art and music next to math and science as a part of your education, all test scores go up,” said Miranda who also celebrated a decade long milestone –– the 10th anniversary of his inaugural play, In the Heights.”

“I can talk about how amazing our students are, but today a picture was worth a thousand words,” said Raab, at a reception following the Q&A. “It was an amazing event to see Hunter in such a great position in front of people who are making such an impact in the world.”

Kadia Goba is an undergraduate journalism student at Hunter College.