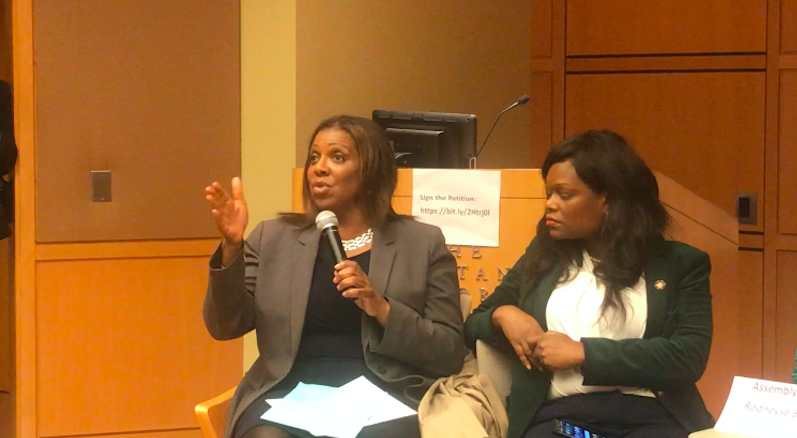 DATELINE: CUNY–What was slated to be a town hall meeting denouncing changes to student activity fees quickly pivoted to broken toilets, chipping paint and leaky ceilings as students and lawmakers called on Gov. Andrew Cuomo to invest more into a crumbling City of University of New York.

The University Student Senate and CUNY Rising Alliance, a coalition of CUNY and non-CUNY organizations who advocate for public institutions, sponsored the two-hour event at Brooklyn College last week. The groups planned the event after CUNY’s General Counsel threatened to change the bylaws to weaken student control over student university fees.

Public Advocate Letitia James, Assemblymember Rodneyse Bichotte, City Councilmembers Inez Barron and Robert Holden along with a representative from Jumaane Williams’ office sat before an audience of about 60 students, faculty and supporters listening to testimony.

“I started this campaign to bring awareness to people both inside and outside of CUNY what the physical manifestation of improper funding looks like,” said Andrea De Silvo, 20. The Brooklyn College sophomore founded the Instagram site @cuny_brokelyn_college where students post photos of decaying infrastructure throughout the CUNY system.

In her testimony, De Silvo said the college didn’t have enough facilities staff to maintain the 32-acres, 18-buildings campus that serves 15,000 students.

Nearly all of the 15 students who testified last Wednesday brought up failing quality of life issues. Jayme Farbowitz, a College of Staten Island student, testified about mold, maggots and the inaccessibility some students with disabilities encounter as a result of stalled elevators.

“Will CUNY have the money to settle a lawsuit before they have the funding to fix the cause?,” said Farbowitz to a round of cheers.

Michael Fabricant, vice president of the Professional Staff Congress, which represents the faculty at CUNY, said the institution is in crisis.

“Frankly, CUNY’s been a target for states disinvestment,” said Fabricant. “Since 2008 this university has lost almost one-fifth of its public dollars on the basis of, essentially, full-time, equivalent students.” Since 2000, CUNY’s enrollment has increased from roughly 132,00 to over 170,000  “with very little commensurate investment,” according to Fabricant.

Cuomo is up for re-election in November and faces celebrity-turned-politician Cynthia Nixon of the HBO series “Sex in the City.” Nixon, who has served as an education advocate for the past 17 years, some say, has been responsible for pushing the governor “more left” on progressive issues making this an opportune time for CUNY to rally the lawmaker for more funding.

The only state lawmaker on the panel, Bichotte, said the state Assembly is limited under the Republican-led State Senate but encouraged students to launch an active campaign in favor of additional funding.

“We can’t do it alone, we have to be civically engaged,” said Bichotte.

Public Advocate James, who is expected to run for mayor in 2021, announced she is backing several initiatives designed to help CUNY students. The Lehman graduate said she and Barron, who heads the City Council Committee on Higher Education, will focus on increasing child care for CUNY students, lowering transportation fares and more pushing for more state-funded programs that assist economically disadvantaged students.