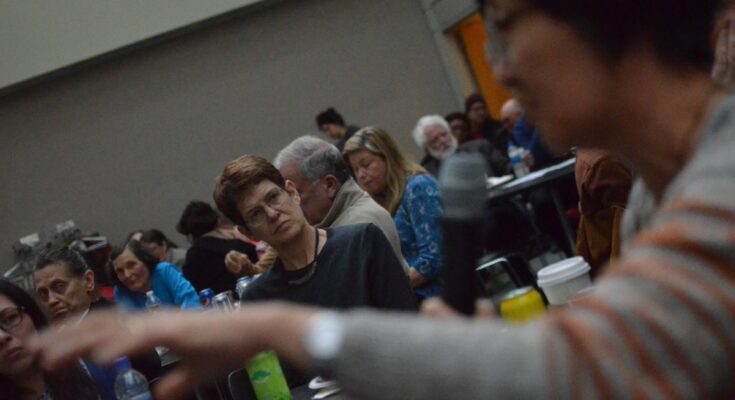 DATELINE: CUNY–During a tense meeting Monday afternoon, 60 faculty and students pressed the interim president of the CUNY Graduate Center about a hiring freeze and budgetary restrictions that raised an alarm within the college.

PSC members said that the hiring freeze was making them “anxious” and many were concerned about potential staff cuts. Attendees echoed feelings of students and staff that the administration needed to be more transparent in how they handled these decisions.

The emergency meeting was in response to a Jan. 9 email sent by Interim Graduate Center President Jim Muyskens which outlined immediate actions that were taking place in order to address a budgetary deficit. These actions included a hiring freeze on new full-time positions, non-teaching adjuncts and part-time college assistants. It also included a 10% cut in administrative funding and a freeze on tax-levy funded travel.

Muyskens provided background on the cuts for 30 minutes and addressed questions for the remainder of the hour. He called the budget deficits “a serious problem” and warned of “dire consequences if we don’t do this right,” but also attempted to mitigate fears of potential cuts saying that “the word ‘cut’ isn’t in my vocabulary.”

Muyskens said that his predecessors “wounded us financially” by overspending. He questioned the Graduate Center’s approach asking if they should support students “that don’t have a ghost of a chance” of getting a job in their field of study. “Whether you like it or not, whether you’re angry or not, we have to work together to solve this problem,” said Muyskens.

Attendees, who were mostly professors and students of the Graduate Center, asked questions and made comments which were sometimes blunt but not confrontational.

Participants were coached to frame their questions focused around the administrations perceived lack of transparency. Some voiced concerns that they would have to do more work with less people because professors leaving or retiring meant that they would not be replaced immediately. “I will have to do a job and a half,” one woman said. “Hopefully other faculty care about that.”

Funding for CUNY across the board has been problematic with some blaming Albany for not contributing enough.

“We have not been getting the money that we need year in and year out,” said Penny Lewis, professor at the CUNY School of Labor and Urban Studies. “There is always a fight.”

Luke Elliot-Negri, a member of the executive committee of PSC-CUNY at the Graduate Center, said that while budgetary have impacted all senior CUNY colleges, the Graduate Center is particularly affected because it “doesn’t have a model” for raising money, citing tuition coverage for doctoral students.

Elliot-Negri encouraged the other members to send a message to state legislators and discussed taking local actions and encouraging in-district visits, suggesting that they needed a “tougher attitude” about lobbying Albany. He also said he knew some

members wanted to “storm the barricades, but I”m not sure what barricades to storm yet.”

Following the meeting, Elliot-Negri told Dateline: CUNY that he was unsatisfied with Muyskens’ presentation and claimed that some of his claims were “outright false,” but didn’t respond to questions regarding the specifics he was referring to.

Jane Guskin, a student in the sociology department, said that she spoke with Muyskens and administration officials over the fall who spoke about budgetary issues, but never mentioned that they were considering freezing non-teaching adjunct and college assistant positions.. “I was so impressed by how transparent they were. Except that they weren’t,” Guskin said sarcastically.

Muyskens told Dateline: CUNY that these hiring freezes wouldn’t affect the students. Guskin, the sociology student, reputed this. She argued that they would be impacted by the services which students receive and how the non-teaching adjunct positions, which were often filled by students, would no longer be available for the time being.

In an email statement to Dateline: CUNY, the President’s office wrote, “The Graduate Center is taking proactive measures to address our budget needs in ways that are consistent with our values: supporting our exceptional doctoral students and attracting and retaining outstanding faculty. We will sustain our financial commitments to our students while preserving the quality of their experience.”