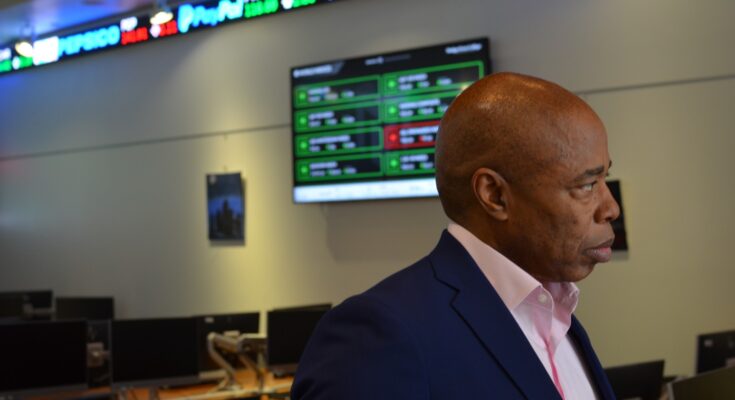 DATELINE: CUNY–A scrolling stock ticker illuminates the outside of the new financial simulation lab at Medgar Evers College where 30 people gathered Monday morning for the ribbon cutting ceremony at the Academic Building One.

The goal of the new lab is to give the campus community a better understanding of how the stock market affects their lives.Funded in part by public grants, the lab will hold business and finance classes and be available for club use. The computers feature software that simulates a mock trading room.

Medgar Evers President Rudy Crew said that the financial simulation lab represented a “snapshot of Wall St,” and said that having one would “create mental wealth.”

“Our students have to have access to world markets,” said Crew, who stressed that the lab would be used to help educate students on market trends.

Brooklyn Borough President Eric Adams, who contributed to the funding, considers the lab an important community investment for a majority black college in Crown Heights, Brooklyn, that has been “historically written off.” He said the lab would be a positive way of teaching students and the community about how finance works.

Adams said that he felt that there was a fear in the community in respect to Wall St. and that having a financial simulation lab could demystify the concepts of finance and markets.

“Our broader hope is for there to be engagement of the community,” said Jo-Ann Rolle, a dean at Medgar Evers College school of business.

The stock market, according to board member Michael Beal, “is tied to everything we do.” He said that the down tick of stocks due to the coronavirus showed how these markets were affected by real life events. Beal also hoped for private investment in the financial simulation lab by private companies like Morgan Stanley.

Students were also excited to see the opening of the financial simulation lab. Lessron Barry, a business and finance major, said that he had been hoping and pushing for something like this for a long time with his club Edusol, which advances solutions to educational problems. “Younger kids should be interested in the stock market because it’s a good way to make money,” Barry said. “Most kids are interested in something like the financial lab.”

Similar labs exist at Staten Island College and at an outpost of Medgar Evers College on Carroll Street in Crown Heights.