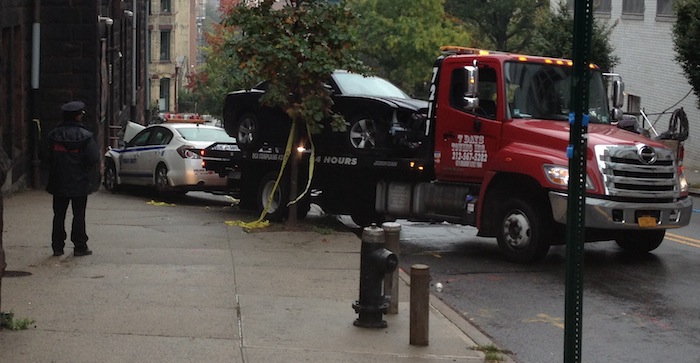 An early morning fender bender stops traffic near campus! by the Campus Staff.

If you were racing to class this morning any time before 9:30 AM, you probably noticed lots of police activity and a major traffic tie up at 141st Street and Convent Avenue–a block from school. A car collided with a CCNY public safety vehicle which ended up crashing into the side of St. Luke’s church on the corner.

“Apparently (this is from bystanders, I didn’t see it) a car was speeding through the light and hit a City College vehicle. When I got there, there were multiple ambulances, police, firemen, and their vehicles.

The car that hit the college car was on the north east sidewalk of 141st, and looks at it had driven ON the sidewalk and THROUGH some scaffolding. No one could figure out how that happened. Also according to other witnesses, the driver ran from his car but was caught by the police. The City College vehicle was on the south east sidewalk, further down 141st. Not sure how many but injured people were being taken away in the ambulances.

Drivers speed through this intersection all the time — it’s wide, with a downhill slope — and some people were saying they’d seen multiple accidents here over the years.”