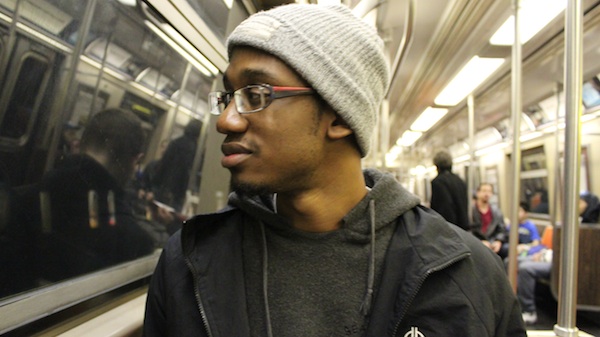 A CCNY student puts his life together after Hurricane Sandy As Told to Ashley Duchemin; Photographs by Samantha Wendorf 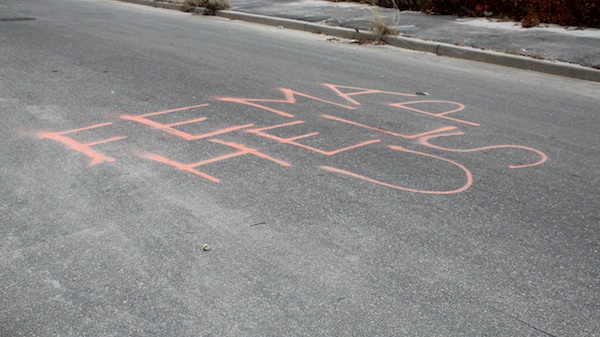 Bennett D. Bennett is a lower junior in the public relations and advertising major at CCNY. He lives in Edgemere, Far Rockaway. His house and the area around him were severely affected by Hurricane Sandy. Here, his story in his own words. 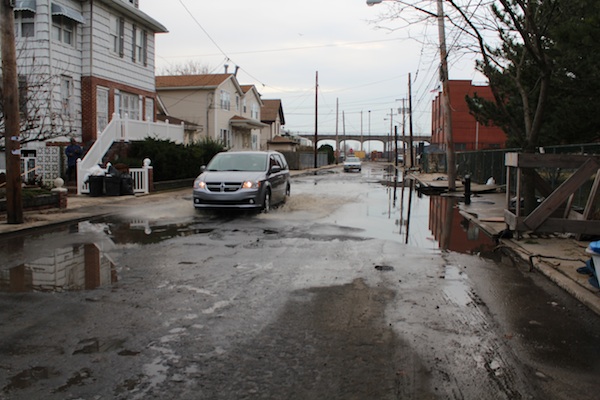 “I have never seen anything like this in my life.”
I evacuated the morning of the storm and went to Brooklyn to my aunt’s house in East New York. I was texting my classmates the entire time as if it wasn’t going to be that big of a deal. It wasn’t until the lights started flickering in the house, and the news showed pictures of waves crashing and power going out in certain areas that I started worrying about home and those that I knew that decided to stay. The next morning, I just really wanted to stay in bed. My family went to The Rockaways without me. When I fully woke up, I tried calling them and I didn’t get anything. It went straight to voicemail. That’s when I started to worry a little bit. How bad was the damage in The Rockaways? Eventually, my dad called. They had left The Rockaways. They were on the way to pick me up.

The first thing he told me was, “Bennett, this storm was really bad. I have never seen anything like this in my life.” It stuck out to me because he’s from Jamaica, and he’s used to tropical storms and hurricanes, but he wasn’t expecting this.

He told me about how the boardwalk was broken into smithereens, how there was a septic tank in front of my neighbor’s house, and one of the containers used from the MTA was on top of a car. He was talking about the house; at one point there was 8 feet of water. It was a great thing that they didn’t take me because I probably would have burst into tears. 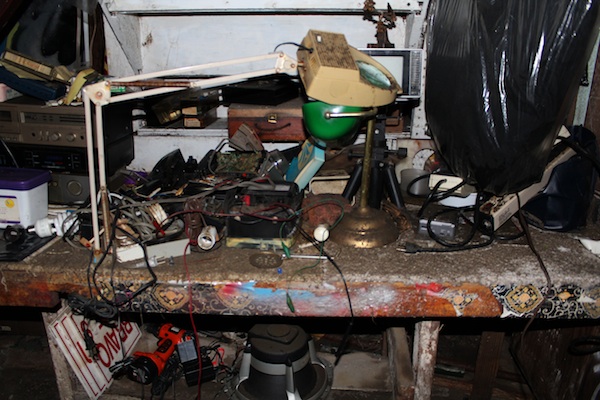 “My computer was gone.”
When we got home, I saw the water everywhere. The floors were soaked with water. The carpet was soaked with water. I could feel it squishing under my boots. When he took me to the basement, there was still 4 feet of water. I saw my favorite jacket. It was this really nice red Adidas jacket face down in the water and it looked defeated. Then, I saw my fraternity jacket and it was covered in asbestos from the pipes, mud, and sand. I earned that jacket from pledging.

There was a rack dedicated to sneakers and dress shoes that I had. Everything was in the water. My favorite pair of Nikes…in the water. The whole basement was at one point covered in water and two feet of the first floor were gone, too. That basically meant my computer was gone. 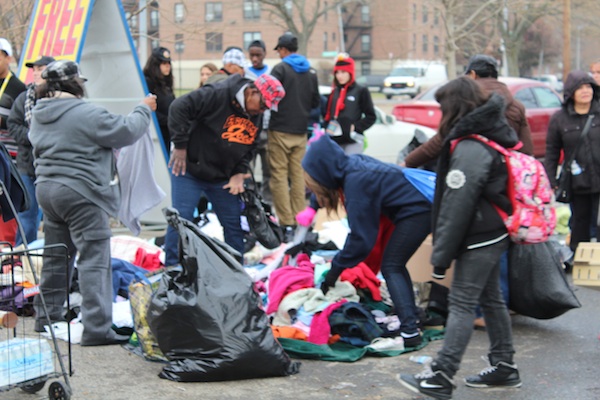 A food and clothing drive at the Super Clean Laundromat

“I just wanted normalcy.”
The first three days after returning home, we spent getting water out of the house. We took a bucket. My step-mom bought a hand pump, and my dad and I joked that that pump wasn’t going to get anything done. The first two days were back-breaking. On the second day, I hit my head on a pipe collecting water and handing it to my dad. Once I hit my head I fell down onto the stairs. By that time, we had cut the level of water down from 4 feet to 2 feet. It’s a really big basement so just to get to that point after a day and a half was good.

Still, that incident was serious. I sat there for a few seconds, collected myself, and kept going because I wanted the water gone. That’s all I cared about. I wanted the water out of the house. Then, I wanted everything that was in the basement out of the house. I just wanted everything to be fixed. That’s all I cared about. I just wanted normalcy.

I already knew at that time that my job was gone. My boss texted and told me, “Hey, we got looted.” That was rough. Seeing my house in the state that it was in and the stuff I lost was rough. That Wednesday, Thursday, and Friday was spent starting to get a grasp on things, and getting that damn water out of the house. 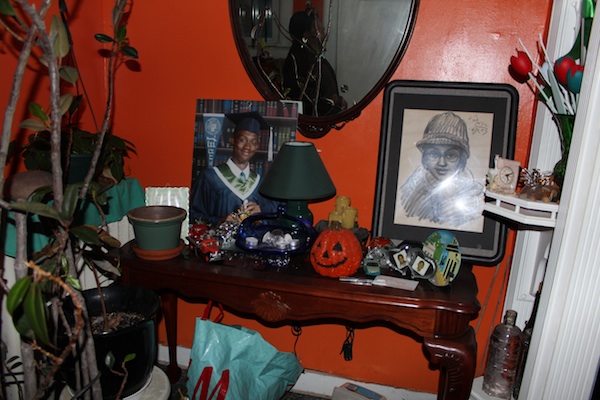 “A major victory.”
On Friday, a neighbor came in from across the street. He’s a cop. He came with his brother and they had a generator. That was probably the best thing that had happened all week because now we could hook up the water pump that we purchased right after Hurricane Irene last year.

At that point, there was still a foot and a half of water. The pump was working. It was great. Then, we thought it ran out of gas. We opened up the tank, filled it with gasoline, and tried starting it again. Everybody struggled with it because it has one of those lawnmower strings. You have to keep pulling and pulling, and it didn’t work. It wouldn’t start, but the water pump cut it down from a foot and a half to a couple of inches.

I know we were joking about that handpump, but we had to use it. We took turns. I went first thinking I could get a workout. My biceps would be ready for school and I’m going to look alright. Maybe I’d get bigger arms from this, but I got tired. I went to take a break and my dad was nowhere to be found. Eventually he screams out, “Bennett! Bennett, come down here!” I go down to the basement and my dad says, “Look, you see all this?” I look and say, “You got all the water out? You used that hand pump?” He said, “Yeah, I wasn’t going to stop until we got the water out.” I said to him, “That’s what I’m talking about, dad. Progress. Progress.” I had been saying that to him all week because we were frustrated. We wanted to get the house back together and I considered that a major victory. 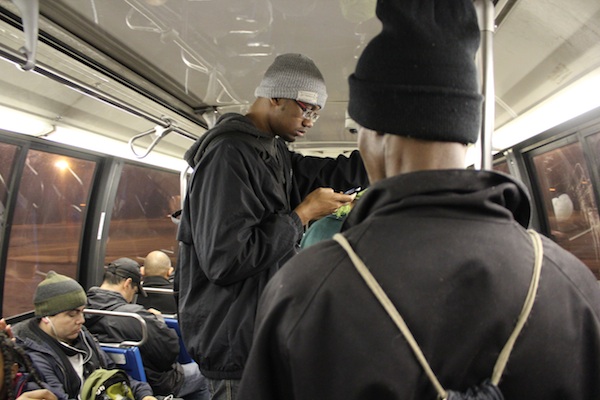 Bennett on the shuttle bus from JFK to the Rockaways

“I wanted people not to look at me as this guy who had gone through all this stuff.”
I was dreading going to school because I didn’t know how people would look at me–my friends, faculty, and people who just happened to know, “Oh yeah, Bennett lives in The Rockaways.” As much as people expect me to like the spotlight, I don’t like talking about myself. I don’t necessarily like talking about my issues unless I’m asked.

Those that know me best know that my heart is on my sleeve. People were worried about me. People were blowing up a phone that I had lost in the water. I wanted people not to look at me as this guy who had gone through all this stuff. I knew that there were a lot of things that I wasn’t going to be able to do because I have no power and I knew that it would be so much harder for me to get home.

I didn’t want to talk. I wanted to avoid, not necessarily conversation about it, but being put into a situation where I might actually break into tears. I told my class the situation and that I was thankful for those who worried about me even though I tell people not to worry about me at all. I hate it when people worry about me. I did feel loved, though. I also felt good knowing that people were just going to let me be me and not trying to force me to be something that I could not be. At the same time, I also felt helpless because people were used to Bennett, Bennett being that guy who basically is there and willing to help in any way that he can. Knowing that I couldn’t do any of that, that hurt me. 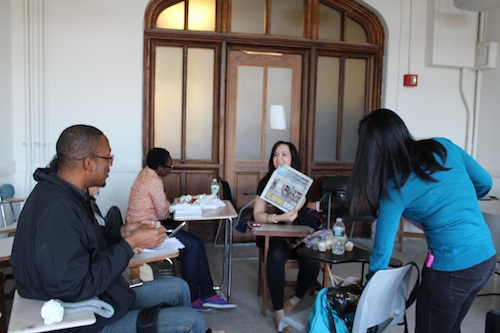 City College students are helping through an initiative to collect any donations and take part in volunteer efforts for The Rockaways. For more information visit Facebook.com/OperationOvercome, Twitter (@opovercome), or email OpOvercome@gmail.com. To learn more about Operation Overcome, read Part 2 of When Sandy Hits Home. 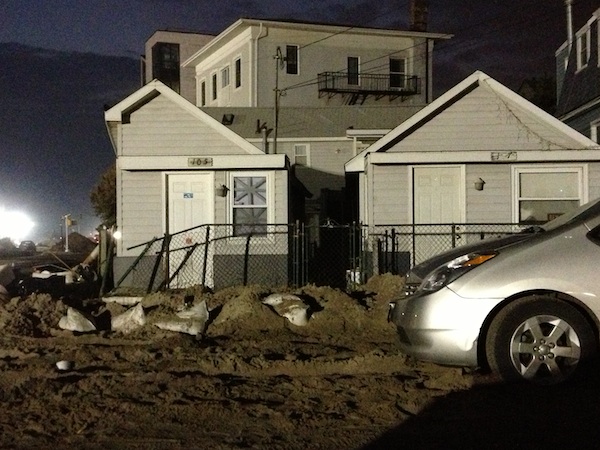 A home overwhelmed by sand, and Sandy, on Beach 90th St on Rockaway Beach