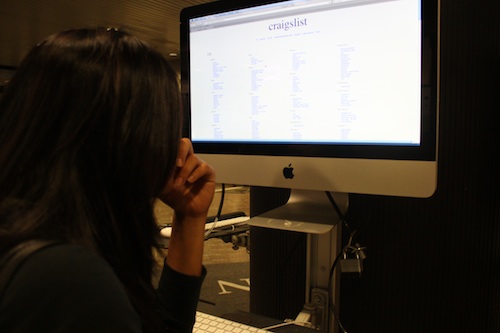 The good, the bad, the ugly by Bryant Buernet

Weeks after the release of the iphone 5, advertisements on Craigslist for the sell of the phone have targeted holiday shoppers as they try to find the perfect gift for cheap. Yet, the price shoppers are paying may be even higher.

Recently, a Glendale, Calif., resident and his 18-year-old cousin were victims of robbery. While trying to purchase two 64-gigabyte iPhone 5s for $950, with $1000 in hand, the targets were held at gunpoint, but fortunately got away.

When students are strapped for money, an easy way to make quick cash is by selling their unwanted belongings on Craigslist. “I purchased some items on Craigslist and also sold things,” says Mukama Chinyelu, film major. “I find it useful for selling items because a lot of students will buy them. They bought my couch.”

Unlike eBay, Craigslist does not take a commission for every sale. It is a free site where people can search for things like household necessities to a pit bull. “It’s kind of like a Google,” says Elisa Cavaliere, 23. “I would go on craigslist, and see the kind of prices people are charging for things, and what potentially I would get for an item.”

However, it’s best to take measures to assure an honest, safe transaction.”Craigslist, clearly has had a lot of problems, with it; people dying, and legal issues,” Cavaliere, an MCA major.

Cavaliere says she’s cautious. EBay is more secure than Craigslist, especially with PayPal being the primary source of payment. If you are using Craigslist, you are on your own. “I rather buy something on eBay that I know comes with people backing me up. Using PayPal, is something that’s more secure,” says Cavaliere.

Not all of Chinyelu’s Craiglist transactions have been positive. He says he was blind-sided when he bought his Honda Accord from a seller on Craigslist, who told him it was in good condition. “I do not buy anymore but I do sell, because I’m an honest seller,” says Chinyelu. “I do recommend to sell, but to be an honest seller, but for buying you have to be very careful.”