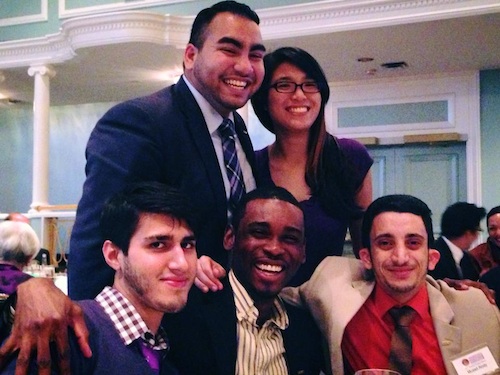 Report from the recent roundtable by Kishan Singh

USG President, Kieshorne Dennie, kicked off the discussion by introducing his vice presidents and opened the floor to questions. Alyssia Paula, a representative from Students for Educational Rights (SER), began by asking about the plans to house student clubs and organizations in the Marshak library.

“Dennie explains, “The space was going to be used by Stanford University and CCNY. However, the space was left vacant after plans fell short. I have a created a student advisory committee, which will discuss how the space should be used.”

About the NAC, Reina informed students about plans to reorganize its first floor. “We hope to create an interactive student center,” she says. “We will keep all of you posted.”

What about Pathways, the controversial initiative to establish a system of general education requirements between CUNY colleges? Says Reina: “We cannot avoid Pathways; it is inevitable. SUNY has already implemented the common core requirements.” USG representatives say they will host formal meetings to discuss Pathways down the road.

Reina also informed students about a new Professional Development Institute at CCNY, which will be unveiled next year.  She says, “We want to make CCNY graduates more appealing to job recruiters. Our new initiative will ensure that incoming students get all the support they need to enhance their skills.”

Club leaders also asked about funding. USG`s treasurer, Kay Ithisuphalap, stated that clubs could appeal for more money through the MK Application. However, she advised club leaders to be as detailed as possible so that USG can thoughtfully consider their requests.

CCNY student Timothy Anderson says he’s impressed with this year’s USG representatives. “I feel that the USG is very engaged,” he says. “Their dedication and passion are evident in their work with the students and administration.”