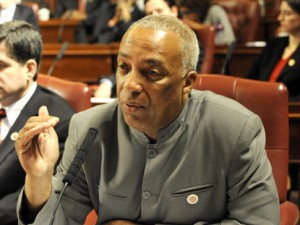 ​Council member and self-described “elected activist” Charles Barron will deliver a speech about “taking responsibility for your life” today in NAC room 5/101 at 12:30 pm. Admission is free.

Tomorrow evening, Venezuelan artist Jesus Garcia will be hosting an event called “”Venezuelans Of African Descent.” Garcia will speak about the racial struggles of African-descended Venezuelans in the present day.

David Patterson can already stake claim in the history of New York politics. Now the state’s first African-American governor can add another accomplishment to his resume: educator.

The Touro College Of Osteopathic Medicine has tapped Patterson for a professorial role at their Harlem campus.

According to a statement, Patterson will teach medical and law students about “health care-related legislation and the overall role of government in health care.” He will also work as Touro’s adviser on public policy, grant development and community relations.

“It is clear that public policy will continue to play an ever-greater role in the provision of health care, and we want our students to have a deep understanding of their profession,” Touro College President and CEO Alan Kadish commented. “Having David Paterson offer his insight will prove to be invaluable.”

Patterson’s new position comes just in time;  he was forced to leave his hosting position at radio station WOR-AM in December after Clear Channel Communications took over the station.
National Urban League Coming To Harlem
The National Urban League plans to move its headquarters to 125th Street, according to a joint statement from Mayor Bloomberg and Governor Andrew Cuomo. The movement is part of a re-development plan to replace the expansive parking garage between Adam Clayton Powell Jr. Boulevard and Lenox Avenue, helping 125th Street’s growth.
“This project will play a key role in Harlem’s ongoing renaissance,” Cuomo said. “It will create jobs, build on the community’s rich arts and cultural history, and attract new investments and opportunities.”
The NUL Headquarters will also include The  Museum Of The Urban Civil Rights Experience, serving as a visitor’s center for Harlem; an Urban League conference center; 114 units of  cheap rental housing; and a 225-car public garage.
Groundbreaking on the project is set to start in 2015. Visit DNAinfo.com for more information.
Harlem Residents Aggravated By Helicopter Noises
Residents of Upper Harlem and Washington Heights have had enough of the loud, sightseeing helicopters hovering over their neighborhoods. And they took to a community board meeting last Tuesday to let their voices be heard.
“It’s become a super-highway in the sky for helicopters — and it’s almost like living inside a war zone,” said Renee Davis, whose 157th Street apartment shakes whenever the copters come by.
“Not just any war zone, it’s like living in the heart of Baghdad!” her husband added. The noise has become so loud that the couple’s newborn son has trouble sleeping during the daytime. Residents say they want the helicopters-which head east up 155th Street and turn west around 179th Street-to fly higher and less often. According to the city’s Economic Development Corp, the helicopters hold 25-30 daily flights during the wintertime, increasing to 70 in warmer seasons.
Read more about this noisy situation at the Daily News website.