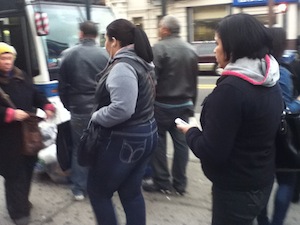 With robbery up, don’t be a victim by Miguel Medina

IPhone users in New York need to be aware of their belongings. Thefts and robberies of electronic devices are on the rise.

According to Daily News, nearly half the 16,000 robberies in the first 10 months of 2011 involved technological devices, and that iPhones account for over 70% of all stolen cellphones on subways and buses. In addition, according to the New York Police Department, there were 11,447 recorded thefts of Apple products between Jan. 1 and Sept. 23, a 40 percent increase from last year that represents 14.4 percent of all other major crimes.

Last summer,  25-year old police officer Ariel Ureña, witnessed an IPhone robbery in 164th and Broadway around 1:30am. “I was in the van with 3 other of my co-workers and it all happened so fast,” Ureña explained. The burglar stole the IPhone 4S from a young lady. “After he stole from her IPhone, she screamed for help. When we were chasing him, he was trapped by a group of guys who beat him down. Afterwards, we arrested him.

This kind of thing isn’t a shocker to Brenda Granados, a 20 year old City College student. She believes that people will steal anything that’s very expensive. “It doesn’t surprise me that people get their IPhones stolen,” she says. “There are a lot of people that have IPhones and people aren’t going to risk stealing something that isn’t worth anything”.

What can be done to stop the problem?

According to Lt. George Crinnion, assistant director of Public Safety at City College, “it starts with people who are always on their phone.”

Officer Ureña wants every IPhone user to be careful when they leave their house and be aware of their surroundings. “It can happen to anyone at any time,” sums up Ureña. “You can’t be having your headphones on the train and look at your phone the whole time. Always try to stay awake when you’re on the train.”