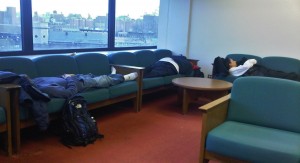 Midterm season is in full swing and students are taking advantage of the increased ours at the library. Between March 4th to the 22nd, the library will be open 24 hours on weekdays and close at midnight on Fridays. On the weekends, it will remain unchanged and have its regular schedule. After spring break on April 3rd the library will be back to its regular hours.

What do staff and students think of this 24/7 library access?

A worker at the library who chose to be anonymous says, “We’re doing this because we know some students need a quiet place to study especially at this time.“

Karlen Cabral, a psychology student likes the change. “This will definitely benefit us,” she says.

Liberal Arts major, Monika Cooney adds, “I’ve been going to the library more often now. Since it is open 24 hours a day, I have the freedom to go there anytime I want no matter how late it is.”

How’s the change working out? There was only one worker at the library stand after 9 p.m. on a recent evening. The third, fourth and fifth floors of the library were practically empty. On the other hand, the first and second floor had a couple of students on the computers, printing and doing work.

Without a doubt, students who use the library  like this arrangement. The question is will this happen again?  The worker who commented earlier says she isn’t sure. “We probably would need more night shift workers to keep this permanent,” she says.