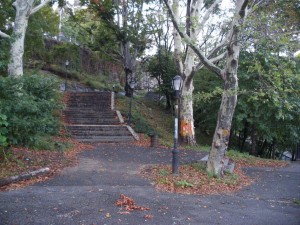 According to a 2012 Report Card On Large Parks from New Yorkers For Parks, our very own St. Nicholas Park rated an overall 77 out of 100. This is a steep decline from 88 in the previous year’s report.

While St. Nicholas has adequate basketball courts, sitting areas and well-conditioned playgrounds, NYFP found significant issues. Half of the park’s drinking fountains don’t work; invasive weeds have griped the lawn, along with litter; and there was damaged fencing near the courts.

The Parks Department has worked to address some of the more gripping issues. They recently repaired one staircase and plan to work on another. The Central Park Conservancy is helping to improve the lawns. And the damaged fencing was repaired shortly after the survey came out. The Friends Of St. Nicholas Park also hosted a meeting last Tuesday to plan upcoming events in the park. One step at a time, guys.

Lawyers for families of two kindergarten students fondled by classmates have filed lawsuits against P.S. 189 in Washington Heights. According to a Daily News article, two children in the class repeatedly pulled down the victims’ pants, pressing their genitals against them. They then ordered the victims to touch and kiss them. The sexual assaults allegedly happened between September 2011 and January 2012.

According to the suit, the victims suffered “psychological and emotional injuries” from the attacks.

“What happened to these two kids is outrageous,” Philip Hines, one of the family’s lawyers, said.  The suit, filed in Manhattan Supreme Court, seeks unspecified damages.

A Harlem-based group is looking to help domestic violence victims escape the vicious assault cycle. W.A.R.M (We All Really Matter) offers women group support sessions, self-esteem workshops and accompanies them to hospitals, doctor’s’ offices and even beauty shops to help them recover. W.A.R.M also helps men come to terms with the issues that make them abusers.

“He was good-looking and worked a regular job,” she told DNAinfo. “He was his own man and had everything I thought I was looking for.” He eventually began referring to her as a “gold-digger” and kicked her out of his home. This brought McGraw to a realization.

“I was not going to draw anyone to me who loved me, because I didn’t love myself,” McGraw said. “The marriage was a manifestation of how I felt about myself. If I wanted anything better for myself, I had to change.”

Referring to women who call W.A.R.M for help with abuse: “I tell women that they called me because they are ready for action.”

Root for your home team!

Today, the CCNY Men’s Volleyball Team will take on Hunter College in the Nat Holman Gymnasium. The match starts at 7 p.m.