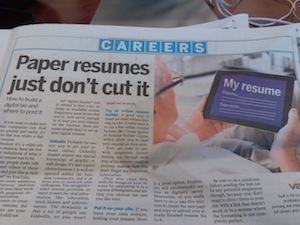 Is the e-version the only way to go? Shantia Dobson

In 2013 many employers are seeking to hire candidates who are computer savvy. This means being able to construct and upload a digital resume in order to make yourself stand out against the competition. Earlier this month, AM New York posted an article called “Paper Resumes Just Don’t Cut It.”

The article explains how to build a digital bio and where to post it. The article noted that sites such as  linkedin are, “the easiest way to get your resume online, and a good choice because it is well respected in the business community.” The paper also suggested trying online resume builders such as career igniter and resume builder online that allow you to host your resume on their sites.

“In order to get a job today your approach must be diverse, and you must integrate networking,” says Rhea Faniel, associate director at the Career Center at CCNY. “Social Media doesn’t get you jobs; it’s networking that does.”

“Meeting and greeting and putting yourself in positions to learn about companies,” she adds. “You have to invest in yourself and in the process.”

Sonji Duncan, an advertising and public relations student, says you have to post your resume online. “That’s all employers ever tell me when I try to give my resume in person,” she says.

According to an infographics on mediabistro, “90 percent of recruiters and hiring managers will visit a candidate’s profile on social network in order to screen the candidate and 69 percent of recruiters will reject candidates based on what they’ve found.” The site also displays a survey conducted by Forensic Psychology which found that “31 percent of people lie on their resume mostly in the form of exaggeration.”