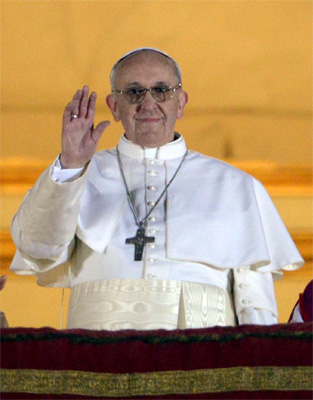 The new Pope, Cardinal Jorge Bergoglio, of Argentina, has gotten world-wide attention since his appointment last week. Now called Pope Francis, he is the first to name himself after St. Francis of Assisi, the first Latin American and the first to have gone against the tradition of praying for the flock in the first address, rather than asking the flock to pray for him.

The question remains, will he be the first Pope to deal with issues like birth control, letting priests to marry, or handling of scandals that have stigmatized the church’s reputation in a different way than his predecessors?
That would go a long way in attracting people to the church. According to a survey conducted by Pew Research Center, “six-in-ten Catholics who are college graduates say that the new Pope should move the church in new directions,” compared with those who say that the pope should maintain the church’s traditional positions.
Juan C. Hernandez, a CCNY student who was raised as a Catholic, agrees. “One of the things that has always pushed me away from the church is how they like to take control of people’s life” he says. “I always say,” he says. “I believe that a priest should be allowed to go ahead and start his own family. As men we are designed with the intent of elongating our family line. So why shouldn’t priests be allowed to do the same?”
“If the new pope doesn’t start modernizing things, the church will probably start losing many more followers along the line,” continues the outspoken Hernandez, a sophomore. “We can’t expect ideas from, lets say, 1542 to apply to 2013. Time for some changes.”

Emelyn Carpio expresses a similar view. “If the new Pope takes different positions on issues such as birth control, I do think it will bring back younger Catholics who have distanced from the religion,” says the sophomore. “They will feel that the religion understands their needs, and they will feel more connected to it.”

Not all young Catholics have the same opinion. “I would prefer that the new Pope rules the church as all of the other Popes have done it before,” says one Catholic student who preferred to remain anonymous. “I think it is a tradition that should not be changed just because the world is changing.”

However, this student wanted the newly elected pope to have a stricter stance on the scandals like sex abuse and frauds in the Vatican Bank. “I believe that the scandals have influenced our view of the church,” the student says. “I always thought that the church was something to view with respect, but if some of them are doing so many wrong things, how are we supposed to feel confident with them when we are going to confess and when we want to talk to them.”