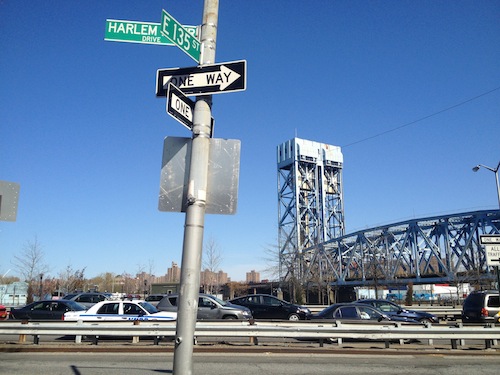 A Harlem native was hit by an SUV Wednesday night in East Harlem. by Melissa Gutierrez

At around 11 PM on April 24, 50-year-old Stanley Williams was hit by a Chevrolet SUV and died upon arrival at Harlem Hospital Center. He was crossing the busy roadway at 135th Street and Harlem River Drive.

Dominique Williams (no relation) didn’t see the accident but heard it. “I was watching TV in my room and I heard a car hit something,” says Williams, 16. “I went to my window and looked and he was just laying there on the floor. It was crazy. Then the cops came and the ambulance took him to the hospital. I felt bad for him.”

The SUV driver, 31, was heading uptown but stood on the scene. Police did not suspect criminal intent.

According to news reports, Williams was recently rekindling his relationship with his 11-year-old son. “They were just reuniting to a nice relationship,” Josette Ceruti, 45, Williams’ ex-girlfriend, told DNAinfo. “He always told him he wanted him to be a better man than he was.”

Ceruti didn’t know how to break the news to his son. “I tried to convince him he was dreaming.”

Williams lived in the Wagner housing development on East 124th Street, between First and Second Avenue.

“He had a good heart,” Ceruti says. “Anyone who knows Stanley couldn’t say nothing bad about him. It’s truly a tragedy. It’s heartbreaking.” You can read more at DNAinfo.