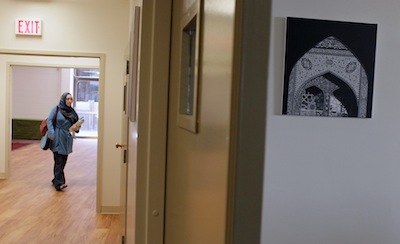 Last month, a Florida Imam was convicted of funneling thousands of dollars to the Pakistani Taliban to support suicide bombings and other attacks. Hafiz Khan was found guilty of four charges—two counts of conspiracy and two counts of providing material to terrorists.

How did the government seal the deal, guaranteeing that the 77-year-old cleric will remain in prison for the rest of his life? The FBI spied on him.

The prosecution’s case was founded on many recovered FBI recordings of Khan’s conversations, in which Khan, according to a Huffington Post article, expressed support for Pakistani Taliban attacks and “discussed sending about $50,000 to Pakistan.”

Without the FBI’s surveillance, there would have been no compelling case against Khan. But is spying on Muslims ever okay?

At CCNY, where the NYPD was caught spying on our Muslim students last year, many feel outraged by this kind of surveillance. “It’s disgusting,” says Nazra, a CCNY Muslim student, who would not give out her last name. She says that “It’s racist, and against human rights–a violation of privacy…[the victims] deserve a proper and official apology.”

“They don’t trust Muslims, and they are sneaking around innocent people…,” she continues.

Her responses can be understandable, given the NYPD’s efforts last year. A year in which a NYPD officer went undercover into a CCNY Muslim student group, infiltrating them for many months, recording how much they prayed among other things and then finally being caught due to leaked NYPD documents which detailed the effort.

Even so, others still have a more understanding view. “I guess in these [recent] cases, they actually had reason to keep surveillance on those people,” says Synthia Chowdhury, a Muslim CCNY student. “I mean–I understand the governments role in keeping people safe. I mean, they are keeping me and my loved ones safe too…”

But Chowdhury believes that the surveillance of Muslim communities, and the images of predominantly non-Muslim protests can create an air of distrust and claustrophobia among Muslim students. “Although I’m not a target for surveillance,” says Chowdhury. “It does affect me a little. Just the thought of being watched would make anyone feel uncomfortable, especially when one is innocent.”