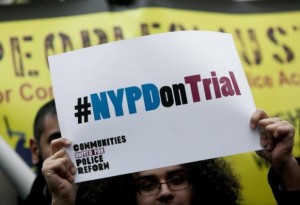 Dwayne Powell, a junior at City College, has been having trouble with New York City law enforcement lately. The Jamaican-born, computer engineering student, who has been stopped and frisked about six times, says he feels discriminated against.

“The last time I got stopped and frisked,” says Powell, “was when I was heading to school running to catch the bus. The cops turned on their siren and drove up to me. They made me put my hands on the police car and started frisking me. After finding nothing they just said, ‘Well we thought you robbed the store on the corner.’” Powell says he felt embarrassed as many people looked at him in broad daylight.

Critics have taken their case to court. Floyd, et. al. v. City of New York is a federal class-action lawsuit challenging the NYPD’s stop-and-frisk policy that went to trial last week. According to the plaintiff, the stop-and-frisk practices violate the Fourth Amendment’s prohibition against unreasonable searches and seizures and the Equal Protection Clause of the Fourteenth Amendment.

Many CCNY students agree with the suit. “I am vehemently against the practice of stop-and-frisk,” says pre-law student Depak Borhara. “It allows the police force to classify and categorize people to be searched with the support of a vague term known as reasonable suspicion. I don’t believe the color of your skin or your age can make any search reasonable.”

Borhara, who identifies himself Afro-Indian American, says he’s been stopped and frisked. “I was walking home from the train station,” he explains. “At an intersection near my house a squad car pulls up and proceeds to stop me, question me, and then frisk me. It was very invasive.”

As a result, Borhara now works with student organizational leaders to spread awareness about the issue. “My organization, Guidance to the Legal Empowerment of the Youth, educates high school students on government, law, and public policy. A component of our curriculum is the practice of stop-and-frisk and how to combat the malignant practice,” he says.

Singh, a sophomore at CCNY, who asked that his entire name not be revealed, is also against the policy. “I think it should be thrown away altogether because it will still have its discriminatory ways against minorities,” says, the political science major.

He, too, has also been the victim of stop-and-frisk. “I was on my way home from my aunt’s house in Williamsburg, says Singh, who is of Guyanese descent. “While I was waiting for the bus, two police officers approached me. They asked if I drink or smoke marijuana. I told them no. They said that I looked suspicious, so they told me to stand against the car and then started to pat me down. They even reached into my pants,” said Singh. “I was so embarrassed and frightening. Once they found nothing they told me to go.”

Although many CCNY students believe that the stop-and-frisk policy should be repealed entirely, others call for reform instead of a full repeal. “I think it should be renewed in a way where cops are only allowed to frisk not off their own intuition but off valid evidence or witness testimony,” says Powell. “If they don’t have a witness or valid evidence, I think the person being harassed should have the option of suing.”

Many say though it can be misused, stop and frisk has helped lower crime rates.

“Homicide has steadily decreased in New York City,” says senior Evan Mastronardi. “So there may be a correlation between stop-and-frisk, the police being placed in high-crime areas, and the lower homicide rate.”

Still, Mastonardi believes that the policy must be watched closely. “I understand that the police have somewhat of a duty to stop crime before it happens,” says Mastronardi, “But there needs to be more oversight because the policy as it currently stands allow police officers to abuse their search power with little reprimand.”