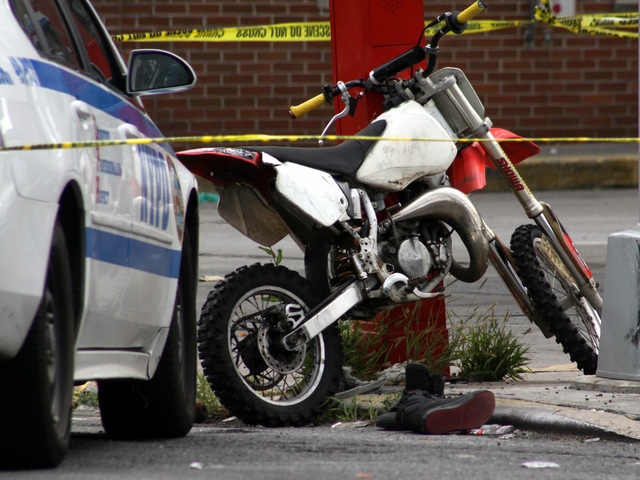 They roar over Harlem sidewalks and generally disregard traffic laws. Now, the city’s dirt bikers are petitioning for a park allowing them to pop wheelies safely and legally.

“We’ve been running from the cops forever,” Harlem biker “Al Capone” told DNAinfo. “Our common sense tells us we need a solution.”

If Capone and other road bike enthusiasts get their way, that solution would be their very own space. Benjamin “Benmore” Charles put it succinctly.

“We need a park ASAP,” Charles remarked. He has gained popularity throughout the biker community for his Spider-Man-themed set of wheels, recently confiscated by the NYPD.

Charles has teamed up with activist Iesha Sekou to create Bikelife, a group dedicated to making a NYC road bike park a reality.

Read more about this story here

A teenager was viciously stabbed in broad daylight after a dispute in East Harlem Monday afternoon. An unknown assailant stabbed the 19-year-old in the arm and shoulder repeatedly just before 5:00 p.m. The incident happened at E. 124th Street between 5th and 6th avenues.

Fortunately, the teen’s injuries are not life-threatening. He was taken to Harlem Hospital and is in stable condition. Police arrested a suspect soon after the attack. He has yet to be charged.

When Denise Adusei found she and her husband were expecting a child in 2008, they looked for pre-schools in Harlem. But since  the area was heavily lacking, Adusei decided to create one near home.

Adusei also received loans from the Upper Manhattan Empowerment Zone and the New York Business Development Corporation. Her Peartree Preschool opened recently. The school, at W. 112th Street near Adam Clayton Powell Boulevard, offers 6,000 square feet and can house 75-100 children. Adusei says she made the preschool affordable so all Harlem children could attend.

“I want this to be a neighborhood school,” said Adusei. “Kids should be able to play with their friends who live in their neighborhood.” Read more about this story here.

There will be a guitar ensemble at CCNY on Wednesday. The ensemble will feature Avi Blum, John Conway and Victor Madera. It will take place in Shepherd Hall room 95 at 2:oopm. Call 212-650-5411 for more information.

CCNY will be holding a panel commemorating the arrival of Juan Rodriguez in Hudson Harbor. Rodriguez is widely believed to be the first non-Indian to settle in New York, arriving in 1613.

The panel will bring a team of experts in early colonial New York history and early colonial Dominican Republic to discuss the historical importance of Rodriguez’s arrival. It will also celebrate the fourth centennial of the event.

The discussion takes place Wednesday in  NAC room 2/202 from 10:00am-12:00pm. Register for seats at http://worlds-juan-rodriguez-connected.eventbrite.com/#