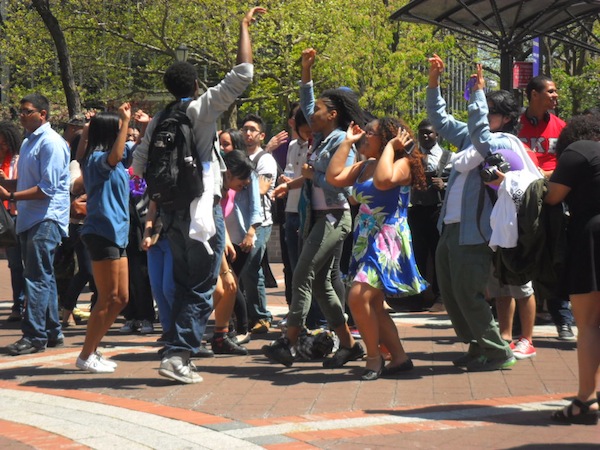 A look at the spring celebration on campus by Christal Somar

Last week’s Lavender Week was in full swing on Thursday May 2 with music blasting, dancing and pure excitement during club hours. From 12pm-2pm, hundreds of students flooded the campus to celebrate Lavender Fest and show some school spirit before hitting the library to get ready for finals. (Click here to see slide show.)

With the campus covered in purple, white and orange balloons, WCCR radio hyping up the crowd and students turning the NAC Quad into a dance floor, the energy was insane. Jasmine Coleman, a member of Lambda Pi Chi, summed up the day. “Free food plus free drinks plus free shirts plus music equals happiness!” she said.

Booths set up around the NAC offered free smoothies, cotton candy and Lavender Week t-shirts. But the tables of free food on the Marshak roof drew the biggest crowds. Lines were so long that some students took one look and walked away.  “There needs to be more food tables because there are so many students,” said a disappointed Iris Guerra, an art major. “One table and one line isn’t going to cut it. It makes no sense.”

Despite the few complaints, it’s safe to say that the Student Life organized a fun-filled day in the sun. Between the eating and laughing, many students jumped in the crowd around the DJ booth to show off their dance moves. From Bollywood dancing to the Dutty Wine, the event attracted all kinds of people, even non-students. Said Precious Allen, on campus for a workshop, as she shouted over the loud music: “The vibe is exciting!”