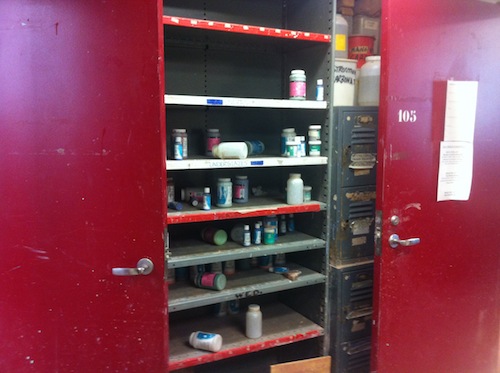 Empty shelves in the art department.

Students want to know why by Sanah Jamal

Students enrolled in art classes at CCNY are starting to complain nonstop. With so few art supplies available, students are finding it impossible to get anything done as final assignments loom.

Majed Ablzokeri says the situation has grown so dire that he’s considering buying his own supplies. “It’s the end of the semester, there is no clay left, there is no glaze left, barely any tools to use, everything basically ran out,” says Ablzokeri, 22. “I can’t even finish my final project the way I wanted to. I have to settle for an unpainted, unsmoothed piece.”

Ayesha Hack, 20-year-old economics major, is just as frustrated. “My Professor suggested we buy our own supplies, even though we already pay a large fee for the class,” she says. “I can’t even finish my project because there’s no stuff left!”

Why the lack of supplies? Not surprisingly, lack of funds. “It is a multilayered problem,” says Michael Conrader, a lab manager for the Electronic Design and Multimedia program. “There are usually just enough supplies to get us through the semester. We come close; usually there’s a slim overhead.”

Conrader believes that private funding would be the best solution. “City College is a state run school, and dealing with the aftermath of the recession, funds for the arts are the first to go,” he explains. “Nobody thinks arts are a necessary commodity for human beings to live, but I think that’s absolutely wrong.’’

Other departments, including the new Colin Powell school, The Grove School of Engineering, and the architecture department all have huge benefactors that keep them up and running in the best possible shape, whereas the art department is barely staying afloat.

Conrader wishes a donor would be generous with the arts. “Art, music, theater, film, it’s always been a struggle,” he says. “People don’t consider the absolute highest level of civilization has been given to us by people like Beethoven and Mozart Davinci and Picasso. Art feeds the spirit!”