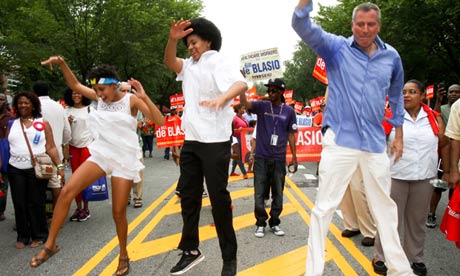 De Blasio and his children at the West Indian Day Parade

The NYC primary election results are in. Political underdog Scott Stringer beat back Eliot Spitzer to become Comptroller-elect. Joe Lhota captured the Republican nod for mayor. And as expected,  Bill de Blasio surged past his opponents to capture 40% of the Democratic mayoral primary-though a runoff with Bill Thompson could happen, given uncounted votes.

It came as no surprise that the heavily liberal CCNY was elated with de Blasio and the other Democratic victories. Republicans needed not apply.

“I’m actually pretty happy that Bill de Blasio won the Democratic nomination,” said Layla Merritt in the SER room. “I mostly voted for him because he was the most progressive candidate. He’s backed by Harry Belafonte, whom I really respect.” de Blasio also got brownie points with Merritt for his diverse family. “He has biracial children, like me-it’s pretty cool. But more than that, it’s mainly because he emphasized the fact that the city and the nation itself are slipping into a dichotomy of rich and poor.”

“In terms of de Blasio, it was inevitable that he would clinch the primary nomination,” said Kieshorne Dennie, who didn’t even pay attention to the Republican candidates. While he also supported de Blasio, Dennie said he initially supported Anthony Weiner, until his weiner brought more trouble in July. “I was actually a Weiner fan up until his sexting scandal came out, and I still sort of am a Weiner fan.”

The former public advocate’s school interest garnered Hollis Heath’s vote. “I love that his kids are in public school and I believe that he’ll have more of an interest in investing in public schools,” Heath said. “As someone who’s in school for education, that’s important to me. He’s also for affordable housing, which I need!”

Though students seemed uninterested in most of the other races, they were upset that Spitzer’s comptroller run failed.

“I was kinda disappointed that Spitzer didn’t pull through,” Dennie admitted. “I think he’s the kind of watchdog we need in that position.”

Heath-who voted for Spitzer-shared the same sentiment. “I’m a City College student, and I know he’s done classes here,” she said. “I just have that City College allegiance to him.”