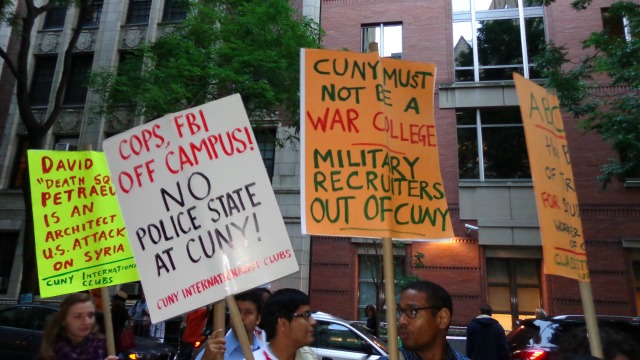 The Ad Hoc Committee Against the Militarization of CUNY staged a rally against David Petraeus outside the Macaulay Honors College Tuesday evening, attempting to disrupt a university benefit gala the former-CIA director was attending.

Students and faculty yelled at Petraeus as he exited a black SUV and quickly entered the college, flanked by NYPD officers. But that didn’t stop protesters from letting him have it.

“We are workers and we are students and many of us come from the nations that are directly affected by U.S. imperialism,” said Michael, a student, during a public speakout session. “Petraeus is just one of the many symbols of U.S. imperialism. He must be kicked out of CUNY, and he is, make no mistake, a war criminal. And he will not be tolerated in a university of the people!”

“As this protest has gone on, I’ve seen several children walk through this lane,” said Taffy, a member of the Revolutionary Student Coordinating Committee. “I’ve seen police smiling at them. What I don’t understand is, how they can be here, defending Petraeus when he kills children. He orders drone strikes on little brown kids in Pakistan.”

Morgan Horowitz took the opportunity to address people who say Petraeus has the right to his views. “I was talking to a student today about academic freedom and they tried to defend the freedom of him (Petraeus) to teach here,” the Hunter College professor said. “And that he has views that we don’t understand. And I agree. I do not know what it is like to want to slaughter children. I can’t imagine him being honest about those practices either.”

After the session, the protesters left the NYPD barricades keeping them from Petraeus and marched right in front of Macaulay. It wasn’t long before this prompted a response by officers, who directly barricaded the front entrance. They then proceeded to violently push and arrest students in a shameful display.

One protester was handcuffed and reportedly punched before being hauled into a waiting van. Another female was picked up and slammed face first to the ground, according to Mario Lavoy. “Two of the officers and one lieutenant threw a girl in the air, threw her on the ground, and put her under arrest,” Lavoy said. “[She] was slammed, like a baby on the ground.”

Some protesters even recalled hearing officers tell a black, female student to, “get your monkey ass” into their van while arresting her with other students. According to the RSCC’s website, six students were arrested in total.

The officers then forced the thinning protesters back behind the barricades. However, that didn’t stop them from chanting against Petraeus. Some called reinforcements and made arrangements to free the arrested students; others shared their response plans. Lavoy plans on filing a complaint against the officers who allegedly slammed the female protester Wednesday.