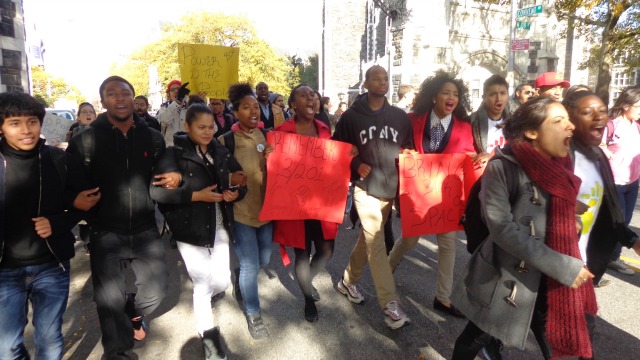 Days after CCNY’s  illegal seizure of the Guillermo Morales-Assata Shakur Community and Student Center, students ramped up their anger with a sit-in outside the Willie Administration building Thursday. They then staged another attempt to reclaim the center, along with a few brief occupations.

But CUNY police were well prepared for the actions.

As students, faculty and Center facilitators approached the Administration building, officers placed barricades outside the entrance and stood watch. Unfazed, the group  gave the higher-ups the mouthful they deserved for their actions. The Campus managed to record some video of the event here. “This is ours!” said one student. “It does not belong to administration; it belongs to students, to the faculty, to the staff!”

During the sit-in, former U.S. veteran and well-known activist David Suker attempted entry with his son. Despite having his state and CCNY alumni ID, officers remained stationary. This promoted Suker to turn around and inform the crowd his daughter asked him to come to the building to help her with the school’s admissions process. 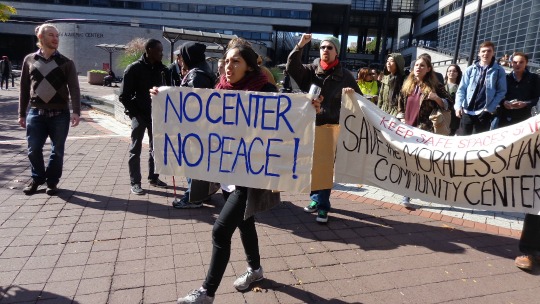 Before long,  students took down the barricades and the speaking continued directly outside the building’s doors. More students from the NAC plaza soon arrived, chanting, “No justice, no peace!” Once the sit-in ended, the group attempted to reclaim the Morales-Shakur Center once more through the NAC’s Amsterdam Avenue entrances.

Unsurprisingly, CUNY officers locked one of the entrances before students arrived. They then rushed the second entrance before security could lock it. A battle between students and officers inside and outside the entrance ensued.

Amidst the fracas, officers arrested Suker, going as far as to pepper spray him while he was already handcuffed. The Campus managed to capture the arrest, along with words between a high-ranking security official who derided the action as “rioting” and a student (see that here).

After a tug of war to snatch metal barricades officers used at the doors, the group decided to reconvene outside the NAC’s main entrance. Upon discovering that security had locked the doors from the inside (along with all other NAC entrances, effectively causing another lockdown), they sat down outside and spoke out about the situation. One of the event leaders asked students to hold up their ID cards in protest.

While security held students hostage inside, the group noticed Juana Reina, VP of Student Affairs, standing nearby. Gathering around, they grilled her about the center raid. “You’re the VP!” a student said. “You can fix it. You have the power-you have the autonomy to fix it.”

When pressed if she had prior knowledge of the administration’s plans, Reina said she didn’t have any information, “but what I do know is that this morning, they put answers to a lot of these questions on the [CCNY] website.” 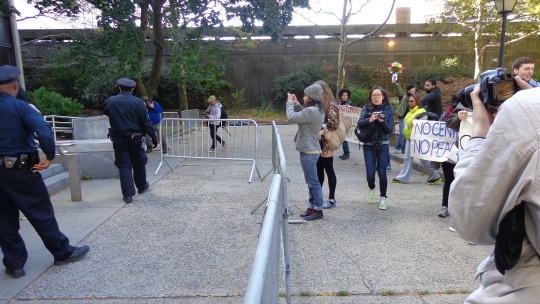 Interestingly enough, when another student asked her if she’d read the site, Reina said she had, but “I don’t remember what’s on the website.” For those who wish to see the school’s Q & A about the expansion, which virtually ignores the Morales-Shakur Center’s existence, click here.

During the confrontation, the NAC reopened its doors. But the students decided to snake around the faculty parking lot to reenter through a construction area.

After a worker warned them the area contained asbestos, they instead infiltrated Harris Hall with chants, then Shepard. Security officers at Shepard radioed for backup as the group held another open mic session in the lobby. See the video of it here.

Upon exiting through the lower entrance, they overtook the street and finally made their way to the Quad, setting up chairs and holding a final speakout to reflect on the day’s actions. A member of the Black Panther movement asked if people could donate to a homeless man who attended the impromptu class-they immediately obliged and filled his hat with money and a token for a local food market.

It was a great day for student activism at City College. Even through media outlets like the Daily News, amNew York  and the New York Post have hailed the center closing-and by the way, they have the wrong facts about Assata-resistance remains strong.

The Morales-Shakur Center was a shining beacon for the Harlem community. Not only did it provide a space for student groups to organize, it was also a soup kitchen, a farm share, offered Know Your Rights training, held can and clothing drives and won multiple victories for CCNY’s working class. To those of you upset these protests are disrupting class, know that without the center, none of you would have 24/7 access to the Cohen Library during midterms week. You also wouldn’t have free printing, a gender-neutral bathroom, the Marshak library or the inclusion of gender identity in CCNY’s anti-discrimination policy.

You may not agree with all the politics there. Perhaps you don’t like the RSCC. Or SER. Or the Marxists. But hopefully, we can all agree that this was an egregious abuse of power by CUNY. And if this mandate against protest passes at the November 25th CUNY Board Of Trustees, we will lose our right to even peaceful protest.

Let’s let the admins know how strong students really are! More pictures below. 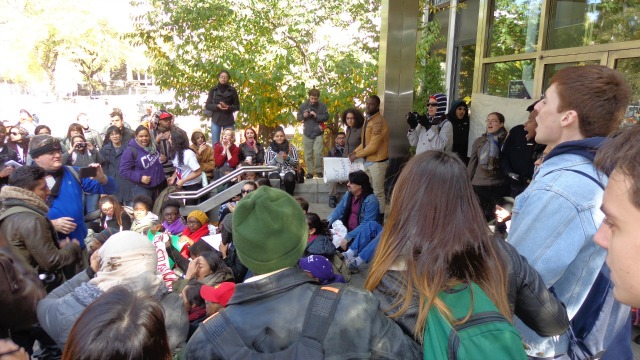 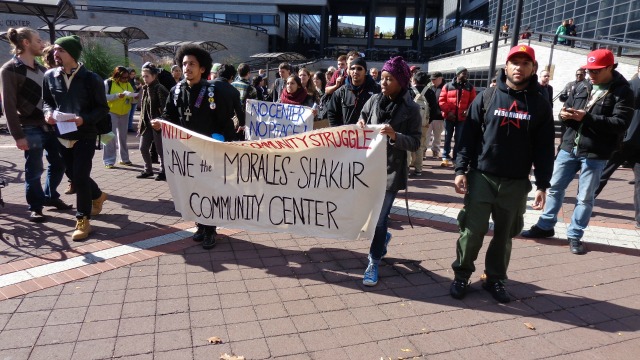 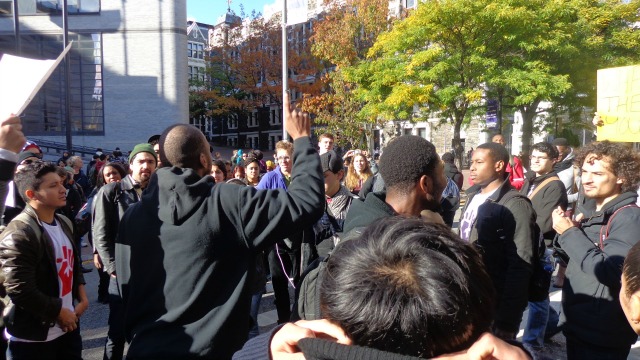