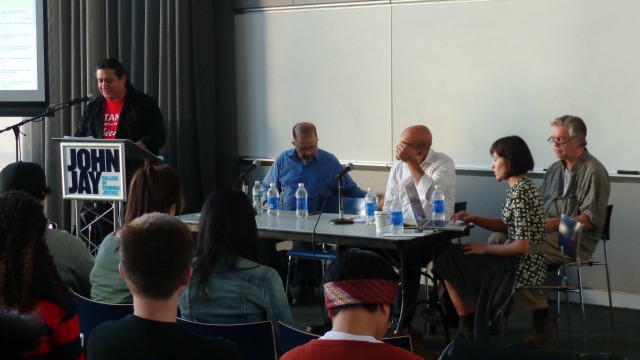 CUNY students, faculty and staff held a meeting at John Jay College Tuesday evening, speaking out in defense of the six CUNY students arrested during a David Petraeus demonstration last month. The meeting was filled to capacity, with students turned away downstairs; donations were also collected to pay for the CUNY six’s legal fees.

“It’s quite evident that the CUNY administration and the City Of New York, as well as the total U.S. imperialist state, have such a high interest that they’re willing to use naked, brutal force, and lie in regards to doing that,” said Freddy Bastone, the meeting’s moderator, referencing how NYPD officers attacked the Ad Hoc Against the Militarization of CUNY’s protest against Petraeus at the Macaulay Honors College.

Bastone also shared how officers shoved batons into his chest at the event, all the while telling him, “Stop touching us!”

The Professional Staff Congress, a collection of over 25,000 CUNY faculty and staff, issued a resolution denouncing the attack. PSC delegate Leonard Dick echoed their outrage and delivered a message on PSC’s behalf. “We are behind the students,” Dick said. “We are behind you; we are with you, we’re there with you in the street, too.”

“We see you as comrades. We think about you all the time. I say that seriously. Not that many people in CUNY know about Petraeus. We are just beginning to get out there for meetings like this-which are essential. We have to reach out to the masses of the people, otherwise we’re gonna run into a wall.”

“This attempt to militarize CUNY-this thing of hiring a war criminal such as Petraeus by the CUNY Administration and the Board of Trustees-is not an isolated case,” said Charlie Moran, a member of the CUNY Internationalist Club and a student at Bronx Hostos Community College. “It’s a part of an international campaign against public education,” he added, noting CUNY’s attempts to ouster immigrant students following the 9/11 attacks.

“The CUNY Board Of Trustees has given the green light to ROTC again to come back into CUNY campuses to ensare students to be cannon fodder for imperialist wars. Students alone, we cannot do it. We need the power of the working class.”

To drum up that power, the Ad Hoc Committee will hold a demonstration outside John Jay today at 5;30, as the college honors Petraeus with a gala inside. You can find more information on the event here. The CUNY Six will make their first court appearance October 17th.