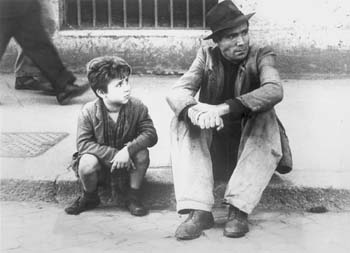 Vittorio De Sica’ s 1948 film Ladri di Biciclette (The Bicycle Thieves) has generated enough acclaim in its life that it’s hard to justify writing another review of it. Nonetheless, for aspiring screenwriters, Ladri di Biciclette is worth examining for the purposes of learning about simple filmmaking, and especially for the purpose of making a great film based on a simple story with very few characters. Arthur Miller calls this one-track conflict of a film “to be very close to a lyrical masterpiece.”

The plot is simple: Jobs are scarce in Rome yet the protagonist Man fortuitously procures one. This job requires a bicycle which the Man also fortuitously procures. During the Man’s first day on the job his bicycle is stolen. The rest of the film focuses on his crusade to find the stolen bicycle and thereby remain employed.

There is a real aesthetic beauty as the Man and his Son tramp the streets, the camera follows, and the city dominates. Rome is so influential that characters lives, their interactions, and their relationships are molded and shaped by her. As the man follows clues to track down his bicycle he transverses what seems like the whole city. Moving from one Roman neighborhood to another, new scenes mean new characters, and new characters mean new conflicts.

There are many touching scenes between the Man and his Son, but one especially where we think the Son has been hurt. This scene reaffirms that the Man’s true priorities are first and foremost with his family, but within seconds the Man is pulled right back into the chaos of the hunt for the bicycle. Throughout the entire film injustice reigns, paired with the utter simplicity of the film’s production, Ladri di Biciclette is a truly remarkable achievement, and an example of unadorned, simple cinema.