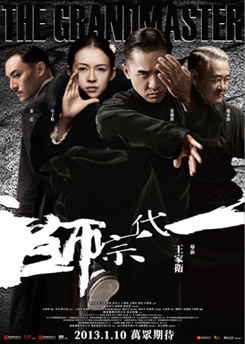 Rains drops shine like diamonds. A choreographed battle becomes a dance of graceful, powerful movement as violence is for this brief moment, beautiful in its chaos. With this incredible fight scene director Kar Wai Wong opens The Grandmaster.

Then Wong replicates the same techniques over and over again, ad nauseam, expecting fancy camera angles and beautiful set designs to carry an entire 90-minute feature. The result, a film where absolutely nothing happens.

Phillipe le Sourd’s cinematography here resembles that of Christopher Doyle’s in Hero (2002). That is to say, it’s amazing, but just in case we didn’t recognize its amazingness in the first scene, the second scene, or even the tenth scene, Director Wong insists we better recognize. Wong pummels the viewer to death with le Sourd’s blazing techniques. Identical shot after identical shot render le Sourd’s imagery utterly meaningless.

This film stars the great of Zizi Zhang of Crouching Tiger (2000) and Hero fame. Here she plays a supporting character, and, oh yeah, is totally wasted as an actress. The disorganized mess of direction spends more time showing slow motion side angles of her pretty face than probably any other single device in the film. Zhang’s combat is graceful as always, but this gets boring fast as there is no discernable purpose to all her fighting.

The main character Ip Man flees whatever Chinese town he’s from as the crisis of a Japanese invasion occurs, but we don’t even care. Eventually Zhang’s character and Ip Man magically meet up in Hong Kong, but by this point, thanks to the miasmic mess that has spewed fourth since the beginning of the film, the only think we do care about as viewers is the amount of time left until the credits roll.