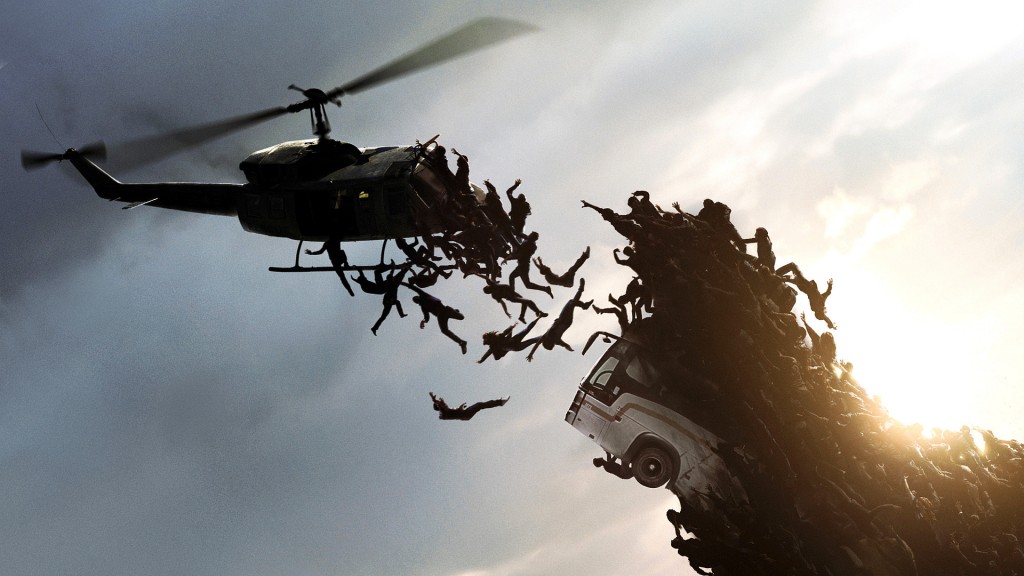 World War Z must have one of the shortest first acts in film history. The first act, usually the first half hour, is generally where the conflict is introduced. This film opens with Gerry Lee, Brad Pitt, a former UN investigator having breakfast with his family. Five minutes later-BAM! Zombies. No time is wasted getting straight to the conflict. Begin second act.

The story is not complicated: zombies take over the world and Brad Pitt is obliged to save the day. The assault of zombie movies over the past few years has been such an onslaught that by default the genre itself now gives me an automatic feeling of “I don’t care.” World War Z is very much another zombie film, but a damn exciting one. Even the script’s name for becoming a zombie- “turning Zeke,” is refreshing in a subtle way.

“It’s not what you say but how you say it.” With cinematic excellence, Director Marc Forster breaths new live into this tired cliché. It’s all in the delivery, and WWZ is all delivery.

As Gerry Lee (Pitt) travels the world trying to solve the mystery behind the infection causing people to turn “Zeke,” the scenes that unfold during his expedition are so exciting that story arc is incidental in comparison. A memorable scene is when a military commander becomes infected. He’s got about ten seconds: “I’m a goddamn Zeke…I got this one boys.” Then, he puts a bullet in this own head.

The exotic set designs of the adventurous locales are the highlights of the film. First an adrenaline pumped escape from an infested Philadelphian housing project, then to a US navy ship at sea, then over to a US military base in Korea where a massive fire fight breaks out. Next Lee arrives in Israel where the citizens have protected themselves against the Zekes in a totally ingenious, but vulnerable walled up construction. The set design here is just incredible and when the situation goes awry and things start blowing up, the visual effects are some of the best around, bar none.

Interestingly, and off topic, there is a real drug called Tetrodoxin that is supposedly the closest thing to an actual zombie-causing agent in existence.